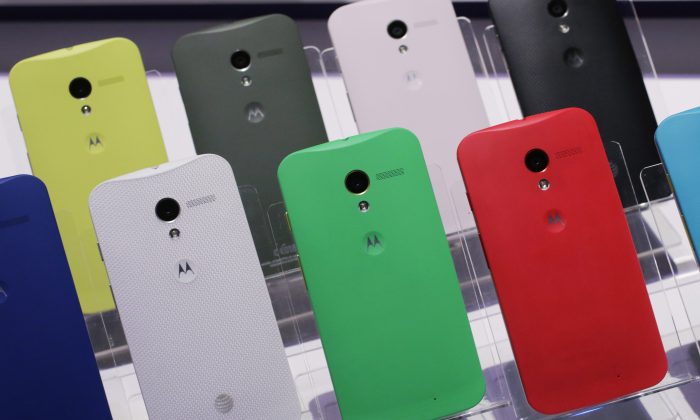 Motorola Moto X smartphones, using Google's Android software, are shown, Thursday, Aug. 1, 2013 at a press preview in New York. The back of the phone is available in 18 colors. (AP Photo/Mark Lennihan)
Tech

Moto X‘s release date is approaching, expected at the end of August and rumored on tech sites to be August 23, and critics are weighing the pros and cons of the new device.

Some say it isn’t innovative enough, but Motorola engineer Iqbal Arshad defends the phone, saying it has changed the design of smart phones so drastically that people can’t easily understand the innovation without a shift in how they evaluate the devices.

The Moto X is the first device released by Google-Motorola since Google acquired Motorola last year.

Joshua Topolsky of The Verge summed up the innovations that immediately stand out: “This device will be one of the first modern, mass-market consumer electronics to be assembled (though not exactly ‘made’) in the USA. It’s the first smartphone that you can customize and have hand-built in a variety of configurations and colors. And it’s the first smartphone that is supposed to represent what the new Google-Motorola union is capable of.”

“But that’s all—mostly—unimportant unless the phone is any good,” he said. “It can match your outfit, sure, but do you actually want it in the pocket of your jeans?” he asked.

The phone will be available on all four major U.S. carriers, though customization options will remain exclusive to AT&T initially. It will sell for about $200 with a two-year contract.

“It’s hard because people are programmed by the industry to look at things like how many cores a chip has or whether the display is 1080P. That’s how chip and display manufacturers differentiate their products. But we’ve spent thousands of engineering hours building a new kind of processing architecture that will really change how people use their phones,” he told CNET.

He said with the multi-core processors, usually the additional cores are turned off—the phone rarely uses all four in a quad-core processor. The Moto X instead has a collection of processors with specified functions. This allows for, among other things, an “always-on” feature. The battery isn’t drained by a function that allows the phone to respond to voice commands without the user having to activate it by hitting a button. The phone is always listening.

As for the screen resolution, Arshad said: “The human eye cannot discern resolution beyond 300 pixels per inch. And we exceed that. So the eye can’t even see the difference. But the human eye can see big differences in color saturation and reproduction. In fact, I’d say that is even more important than resolution. So we decided to focus on that aspect instead.”