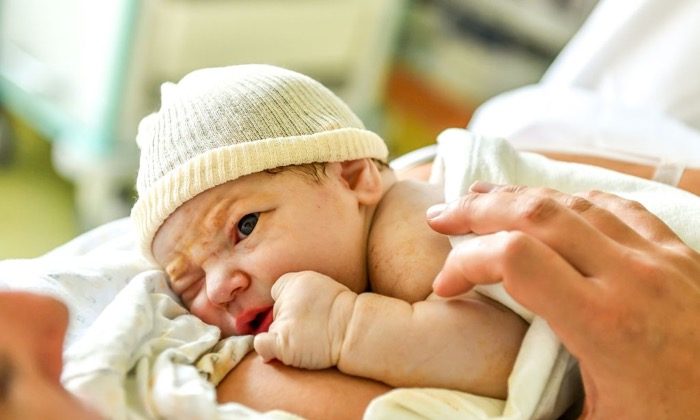 A newborn lies on his mother's stomach after a delivery at the medical clinic St Vincent de Paul in Lille, on Aug. 17, 2018. (Philippe Huguen/AFP/Getty Images)
US News

Mother’s Use of Drugs During Pregnancy Is Not Child Abuse: Supreme Court Ruling

The Supreme Court of Pennsylvania on Dec. 28 ruled that women’s use of opioids during pregnancy does not constitute child abuse, according to court documents.

It was found that fetuses and unborn children do not fall under the definition of a child under the Child Protective Services Law (CPSL). Therefore, a woman cannot be declared a “perpetrator” for using drugs, even if the newborn suffers from birth defects after it is born.

An earlier decision by Superior Court Judge Geoffrey Moulton was overturned. In the decision, he wrote that a mother’s drug abuse during pregnancy may be constituted as child abuse if authorities could prove she “intentionally, knowingly, or recklessly caused, or created a reasonable likelihood of, bodily injury to a child after birth,” the Associated Press reported.

The case involves a mother that was released from jail in 2016. After her release, she relapsed into drug abuse, using opioids, such as painkillers, and marijuana. She later learned she was pregnant and sought treatment for her addiction through a methadone maintenance project, and with subutex—but the treatment failed, and she relapsed again.

She gave birth in 2017, and three days later the child started to experience neonatal withdrawal symptoms (NWS), such as tremors, excessive suck, increased muscle tone, and loose stools. This led to the newborn being treated for opioids.

Clinton County Children and Youth Social Service Agency (CYS) got involved after the Williamsport Hospital, where the mother gave birth, communicated the information about the family to the agency. CYS then filed for emergency protective custody of the child, which was granted.

Based on the child’s bodily injuries, the CYS alleged that the woman was a perpetrator of child abuse because—due to taking drugs during pregnancy—she inflicted suffering on her child. CYS said that finding abuse, in this case, would protect future children from abuse, states the hearing document.

Labels Will Not Prevent Further Harm

The Supreme Court found no evidence that suggests labeling the mother as a perpetrator of child abuse would protect future children from abuse.

“Labeling a woman as a perpetrator of child abuse does not prevent her from becoming pregnant or provide any protection for a later conceived child while in utero,” states the hearing document. “It also does not ensure that the same woman will not use illegal drugs if she does again become pregnant.”

David S. Cohen, the mother’s lawyer, considered the ruling a win for all pregnant people, according to Woman’s Law Project.

“As we argued, allowing people to be classified as child abusers under state law in response to alleged behavior while pregnant contradicts the clear legislative intent of the law.”

He then added that this would set a dangerous precedent wherein nearly any behavior while pregnant, like undergoing chemotherapy, would be considered child abuse.

In support of the family unit, the Supreme Court stated that labeling the mother a perpetrator of child abuse would lessen her time participating in the child’s life, as well as making it unlikely for the mother to get a job.

Miguel Moreno
Reporter
Follow
Miguel Moreno is a reporter based in New York City who works for the Epoch Media Group. His main area of focus is breaking news and politics.
Miguel_NTD