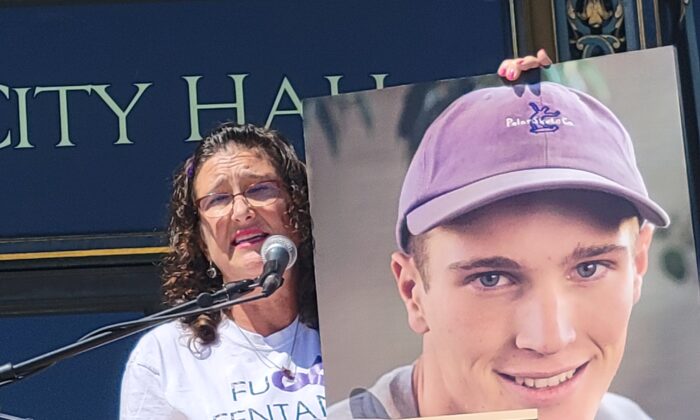 Michelle Leopold speaks at a rally in front of City Hall in San Francisco on Aug. 21, 2022, while holding a photo of her son Trevor who was a victim of fentanyl poisoning. (Jason Blair/Epoch Times)
Northern California

Mothers Against Drug Deaths held a rally in San Francisco on Aug. 21, the first National Fentanyl Prevention and Awareness Day.

In front of City Hall, hand-painted rocks were placed on the front steps leading up to a podium. Each one represented a life lost to overdose in San Francisco this year from January to July.

“There are nearly 350 rocks,” said Mothers Against Drug Deaths cofounder Jacqui Berlinn at the podium, speaking to rally attendees.

Drug overdose has been increasing in many areas of the United States. In San Francisco, it killed more than twice as many people as COVID-19 in 2020 during the height of the pandemic.

Among the dangerous narcotics, fentanyl has been found to be among the most deadly. The drug is similar to morphine or heroin, but it is 50 to 100 times more powerful.

The Drug Enforcement Administration (DEA) has warned the public that with fentanyl, “one pill can kill.”

“We want change, and that’s what this rally is about,” Berlinn said.

Overdose is the number one killer of people aged 18–45 in the United States, according to an analysis of government data by Families Against Fentanyl, an opioid awareness organization. Fentanyl kills a person every 8.57 minutes in the United States, and more people died from the drug than from gun homicides, car accidents, and suicides in 2021, according to the analysis.

Mothers Against Drug Deaths has been working to raise awareness of fentanyl and the overdose crisis since August 2021.

“We just started meeting more and more moms and families who have lost loved ones or they have loved ones on the street in addiction. And so much of it now is fentanyl,” Berlinn told NTD, a sister media of The Epoch Times.

“Devastatingly, so many of these parents have never heard the word fentanyl before their child died from fentanyl poisoning,” Michelle Leopold said at the rally podium while holding up a large photo of her son Trevor.

At 18, Trevor died after taking a pill he thought was a prescription painkiller. The pill was actually laced with fentanyl.

According to the DEA, drug dealers are selling fake pills marketed as legitimate prescription medicine, but they contain fentanyl. This has led to accidental overdose deaths of people like Trevor who never even intended to take fentanyl.

These deaths are often referred to as fentanyl poisonings instead of overdoses.

“If you have kids, talk to your kids. If you yourself don’t know about it, get educated so that you understand the crisis that we’re facing right now,” Tom Wolf, a former addict who also experienced homelessness, told NTD.

“The drug crisis and the addiction crisis [are] also complicating our response to homelessness. The two are directly involved,” said Wolf.

Wolf said that the way out for so many struggling addicts on the street is recovery, and unfortunately it seems that many harm reduction programs that offer addicts support see that as an afterthought.

He said he’s fine with offering support to a point but eventually that support needs to include a push to pursue recovery.

“We have to take it to the next level, which is drug treatment, and get people into recovery and help them find purpose so they can rebuild their life,” said Wolf.

Overdoses and open air drug markets in San Francisco have attracted national attention in recent years. Much of that attention has been fueled by videos circulating through social media.

“I remember the day I called my mother and I said, ‘Mom, I just saw someone the same age as you with a needle in their leg wearing a diaper. What city did I move to?” he said.

Along with Safai, San Francisco Supervisors Matt Dorsey and Rafael Mandelman were in attendance. The city’s new district attorney Brooke Jenkins was also there.

Stephen Martin-Pinto, a San Francisco firefighter, told NTD that as a first responder trying to help the public with medical care, the unchecked drug markets can be distressing.

“But when these things are allowed to proliferate, these open air drug markets, and nobody does anything about it, you feel like you’re fighting in a battle that has no end or nobody even cares to fight,” said Martin-Pinto. “Is what I’m doing even meaningful?”

Many people also spoke in opposition to Senate Bill 57, a bill that would have allowed some cities in the state to have sites where illegal drugs can be used under supervision. The bill was vetoed by Governor Gavin Newsom just a day after the rally.

In response to the veto, San Francisco Mayor London Breed tweeted: “The news about SB57 is disappointing but we aren’t giving up. Overdose prevention programs save lives and help connect people to treatment and services.”