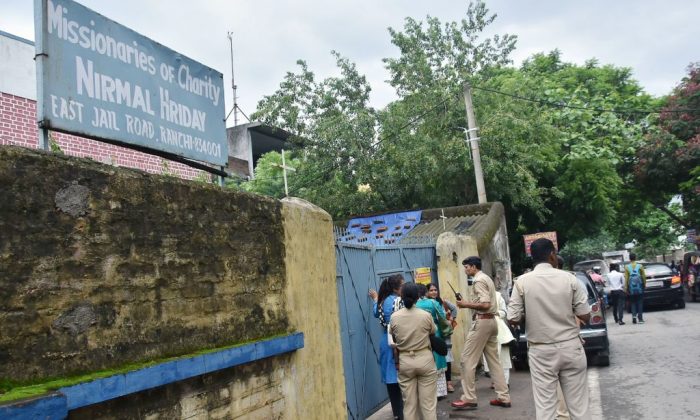 This photo taken on July 4, 2018 shows Indian police gathered outside the premises of Mother Teresa's Missionaries of Charity where a staff member and a nun worked before their arrest on child trafficking charges in Ranchi in India's eastern Jharkhand state. (/AFP/Getty Images)
India

Employees of a charity set up by the late Catholic saint, Mother Teresa, are being investigated over allegations of baby trafficking.

One of the women working at the Mother Teresa’s Missionaries of Charity in the Indian state of Jharkhand has been arrested for allegedly selling a baby that was just 14 days old.

Meanwhile, two other female employees from the charity have also been detained and are being questioned. Authorities made the arrests after the state’s Child Welfare Committee registered a complaint.

Police officer Aman Kumar told the Associated Press that an Indian couple had claimed they paid 120,000 rupees ($1,760) to Anima Indwar in order to obtain a baby. Indwar worked at the shelter run by the Missionaries of Charity.

The multiple arrests took place from July 3 to 4 and followed the couple’s complaint that the charity worker had taken back the baby, a boy, and kept the couple’s money.

The arrested women could face up to five years in prison for selling a baby from the institution, AFP reported. The charity also cares for unwed pregnant women and mothers in distress.

Neither the charity, nor the Child Welfare Committee, responded to a request for comment.

“There was no question of selling any child as the Missionaries of Charity had stopped giving children for adoption three years ago,” charity Spokeswoman Sunita Kumar said in a statement. Kumar claims that the charity had never taken money from parents while arranging adoptions in the past.

There have been multiple reports in India of children being trafficked through charity-run homes and hospitals, which campaigners say are likely driven by long waiting lists for adoptions, according to the Times of India.

Officer Kumar said they found 100,000 rupees ($1,470) on the two arrested employees, and that police have shifted 12 pregnant women from the charity to a government-run home for care.

Mother Teresa officially started the Missionaries of Charity on Oct. 7, 1950, according to the charities website. She later set up shelters to help the “poorest of the poor.” Teresa received the Nobel Peace Prize in 1979 due to her charitable work.