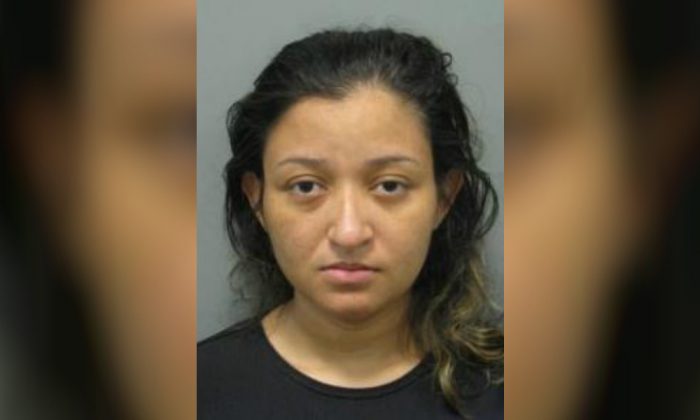 A 25-year-old Maryland woman who admitted to abandoning her newborn baby after initially denying she gave birth was arrested and charged with child neglect and reckless endangerment.

Leticia Guzman went to a hospital on Aug. 17 showing signs of having recently given birth but she denied to staff there that she had been pregnant.

When investigators interviewed the woman at the hospital, she “acknowledged that she had given birth to the baby and had left the baby at a location that she said she could not recall,” police said in a statement.

ABANDONED BABY UPDATE: Police have charged a woman who allegedly abandoned her newborn in a wooded area in Silver Spring shortly after the child was born. https://t.co/G0gOFfKTNF pic.twitter.com/7lKuE7GJHc

The baby was found on Aug. 16 in a wooded area in Silver Spring around 5 p.m. by a man who was walking on a sidewalk and heard the baby crying.

Guzman was released from the hospital on Aug. 30 and arrested.

Police officials were not able to provide bond information.

After the baby was found, police said it was fortunate the passerby heard her cries.

“We were very fortunate that that man was walking down that sidewalk,” Sgt. Rebecca Innocenti with the Montgomery County Police Department told WJLA. “She didn’t have any clothes on, no diaper.”

An area man said what happened was “a shame.”

“It’s a shame. Let’s hope the child survives and thrives,” said David Devlin-Foltz. “We’re just happy for the child and feeling badly for the family or the person who felt they needed to do this.”

Maryland has a Safe Haven Law that enables new mothers or fathers to give up their baby.

“In Maryland, no one ever has to abandon a newborn baby. Under the Safe Haven law, a distressed parent who is unable or unwilling to care for their infant can safely give up custody of their baby, no questions asked,” according to the state’s Department of Human Services.

“Newborns can be left at hospitals or law enforcement stations, some of which are listed below. A parent (or another adult with the approval of the mother) has up to 10 days from the birth to invoke Safe Haven anonymously and safely leave a baby with a responsible adult at a designated location. A person who invokes Safe Haven is immune from civil liability or criminal prosecution provided the child is unharmed.

The department’s website has a list of hospitals and police departments in the state. There are dozens across Maryland people can take babies to under the law.

A flyer (pdf) explains that people who want to take advantage of the law only have to walk into a hospital, clinic, or police station and say, “This is a Safe Haven baby.”

“You may be asked questions about the baby’s health and family health history, but you do not have to answer any questions if you do not want to,” the department added. “The medical history of your baby will help the staff do a better job of providing the medical care your baby needs.”

The department noted that babies must be unharmed, meaning “the infant has not been abused or neglected since the time of birth.”