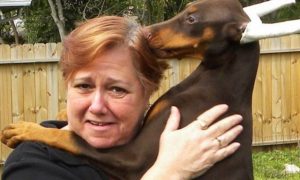 The mother of the 4-year-old boy whose arm was bitten off by a dog has spoken out for the first time.

The boy was playing in his backyard when he approached a fence that separated his yard from a neighbor’s. He stuck his hand through the fence and was bitten by one of the neighbor’s two huskies.

Hope Elizabeth Brown, the mother of the boy, spoke out on social media after the attack and detailed what happened.

“Our son was involved in a brutal attack where a husky went under our fence and bit Austin’s hand and then attempted to pull him back under the fence,” she wrote on Facebook.

“He has multiple other bites as well as severe bruising on his face and jaw and a black eye.”

Brown said her husband was with her son and witnessed what happened.

“What ensued was a brutal tug of war between my husband and my baby boy who was wearing mittens not waving socks at them,” she posted, according to KUTV, disputing reports that her boy had a sock over each of his hands.

She said that both Huskies tried to maul her son to death.

“These dogs were going for kills shots towards my son’s neck. The only thing that saved my son’s life was the fact they couldn’t pull him all the way under the fence,” she said.

Pictures of the family show they also have a younger boy.

They have asked for donations through PayPal for Austin’s hospital stay.

“Any other donations will go towards helping Austin and our family during this time and hopefully getting a prosthetic in the future. He will need one from the elbow down,” the boy’s mother said.

John Brown, identified as the boy’s father, has not commented on the attack.

Pictures of the scene on March 3 showed a helicopter, a fire truck, an ambulance, and other emergency vehicles outside the house. The Layton Fire Department said the boy was airlifted to the hospital in stable condition but needing “surgical intervention.”

“We’ve not found it in the backyard. Our fear is that it may have been ingested by the dog,” Cook said.

He also speculated on what happened.

“I think this is one of those innocent child play moments where the dogs have probably been in the backyard many, many times,” he said. “He’s seen them and maybe even done something similar with them before, but for whatever reason this one kind of took a tragic turn today.”

Layton Fire Department Battalion Chief Jason Cook told Gephardt Daily that the owner of the Huskies claimed that the dogs had never shown any aggression before.

Davis County Animal Control said officers had never been called to the house before. After the boy’s arm was bitten off, the dogs were placed in the custody of the Animal Control.

The dogs have not been put down as of yet; tens of thousands of people have signed a petition to try to save the one that bit the boy as Animal Control officers investigate what happened to determine their fate.

Davis Co. Animal Care and Control will determine whether a dog, that bit and severed a young boy’s arm on Sunday, is a danger to the public. investigation is underway. Fire dept. said boy reached under this fence wearing a sock on his hand. The dog was in his yard when he bit. pic.twitter.com/jCmaG9Ygj9

Jessica Nusz, who started the petition and who describes herself as best friends with the dogs’ owner, called what happened a “freak accident.”

Rhett Nicks, director of the Animal Control, told KUTV that “a lot of these cases are not cut and dry,” and said the dogs were placed in 10-day quarantine to check for rabies, per protocol.

Depending on the findings of the investigation, the consequences range from nothing happening to the removal of the dog from the property.

Cases of euthanizing dogs are rare, he said. The shelter has a no-kill status and euthanizing animals requires a court order.