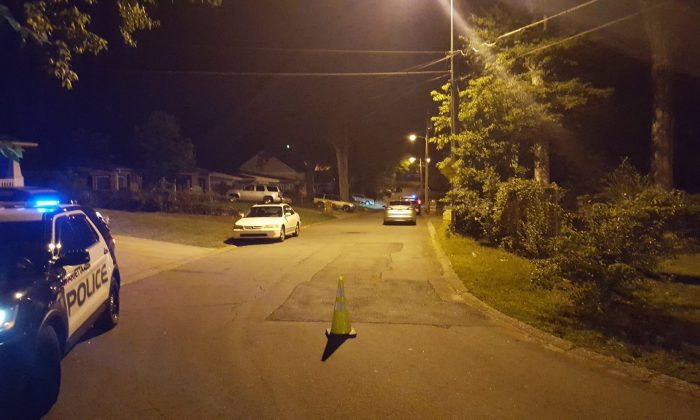 A police photo shows the seen of an early morning shooting where a woman in Marietta, Georgia shot a home intruder on August 3, 2017. (Marietta, Georgia Police Department)
Crime and Incidents

The Marietta Police Department dispatched officers to 98 Griggs St. at 2:23 a.m. after a woman called 911 from inside the home to report someone had attempted to break in and she had shot him.

In a Facebook post on the incident, police said that the officers found a deceased male in the home upon arrival.

“Detectives are on scene and this is an active investigation,” read the post.

Police said they have now verified that the caller was home with three small children when the incident occurred. A neighbor told a local TV station that the children are all quite young, with a newborn baby and one child around 2 years old and the other around 4 years old.

The neighbor, Jasmine Garry, told reporters she lives directly across from the woman’s home where the shooting took place and their children play together.

“We’re all family here because pretty much everyone on this street has lived here their entire lives,” said Garry.

The shooting was a shock she said. Police don’t frequently have to send officers to the area, reported AJC news. The house is a short walk to century City Club Marietta golf course, which hosts a stately Hilton Hotel and conference center. There is also a new subdivision being built in the area.

Police said they are investigating the incident and detectives will interview the female 911 caller, as per standard procedure.

They ask that anyone with information related to the home invasion and shooting call the Marietta Police Department tip line at (770) 794-6990.

The woman shot one of the thieves dead, said police.