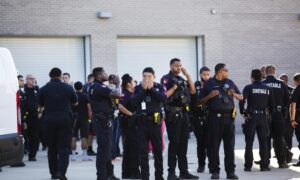 The mother of a Texas 2-year-old missing since Sunday, Oct. 28, has been arrested in connection with the child’s disappearance.

Tiaundra Christon, 21, was arrested and charged with child endangerment for allegedly leaving the child alone near a pond in Gabbard Park, and giving a false report to police, according to KHOU11, citing records from the Brazos County Jail.

The College Station Police Department (CSPD) said it is still trying to locate the little girl, identified as Hazana Anderson.

Her mother told police she arrived at the park with her daughter around 8 a.m., according to the CSPD. She then said she returned to her car to get a bottle for the little girl.

Upon returning from her car, the mother discovered the 2-year-old had vanished from her stroller.

Lt. Craig Anderson of CSPD told KBTX Monday morning that he is unsure that the child was in the stroller.

“We got some video of the surrounding areas, which show her pulling up, but we don’t know if the child was ever in the stroller,” Lt. Anderson said.

Anderson told ABC reporters that officers have searched the park and surrounding neighborhoods, but found no sign of the little girl.

Police said Christon “was not providing truthful information” when interviewed, and that she was charged with abandoning/endangering a child because she left Hazana close to a body of water. Police said this was an environment that “posed a potential risk to the safety of the child.”

Hazana’s extended family had also been searching for the girl and handing out flyers, according to ABC affiliate KTRK.

Family members told KHOU11 that the search has expanded into Houston and Louisiana, though the police have not confirmed this claim.

The little girl’s father said he hopes his daughter is alive and will be found.

“I’m worried, hopeful,” Taboerick Anderson said, according to the report.

Anderson told reporters he broke up with the child’s mother several months ago. He said mother and daughter lived in an apartment in Bryan, Texas.

Police said Hazana is about 3 feet tall and weighs 28 pounds, with black hair, brown eyes, and a dark-colored birthmark around the big toe on her left foot. She was last seen wearing an olive green jacket, a black “girl squad” shirt, cream-colored pants, pink socks, dark pink shoes, and a purple beanie.

Police have requested that anyone with information on Hazana call 979-764-3600.