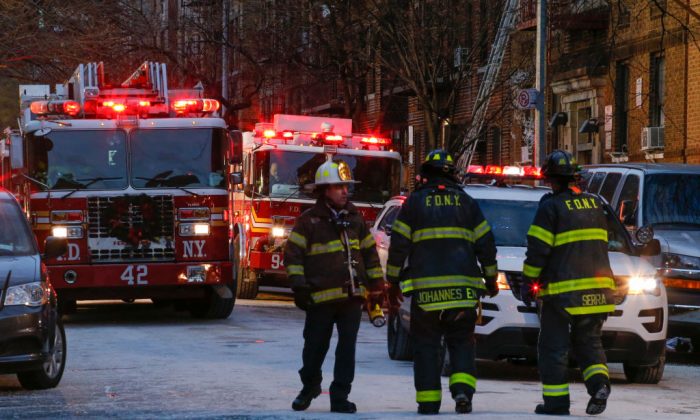 New York firefighters work at the scene of an apartment fire on Dec. 29, 2017, in the Bronx, New York City. Officials said Friday that the death toll from the fire has reached 12, including four children. (Kena Betancur/AFP/Getty Images)
Crime and Incidents

Elain Williams said she lost her daughter, sister, and two nieces in the Thursday night fire at 2363 Prospect Ave.

“I feel so empty… so lost,” Williams told the New York Post outside the damaged apartment building on Friday, Dec. 29.

“Standing right here my soul is gone. Four [victims], one family? Come on now—I don’t wish that on my worst enemy,” she said.

The four family members were identified by Williams as her 19-year-old daughter Shawntay Young, her sister Karen Stewart, 37, and her two nieces—Kelly Francis, 6, and Kiley Francis, 2.

Her brother-in-law, Francis Holt, was also recovering in hospital from injuries.

Over 160 #FDNY members are operating on scene of a 4-alarm fire, 2363 Prospect Ave #Bronx pic.twitter.com/wjN9mMqCHU

Daniel Nigro, New York’s fire department commissioner, said on Twitter that the fire started in a kitchen on the first floor. The fire was caused by a young 3-year-old boy who was playing with the burners on a stove.

Williams said she was on the street coming home from work when she got a call about the fire.

“I was calling my daughter to see where she is—accidentally she [was] upstairs at her aunt’s. She got caught in the fire too,” Williams the New York Post.

FDNY Fire Marshals found that this fire started in the kitchen on the first floor. It started from a young boy, 3 ½ years old, playing with burners on the stove –#FDNY Commissioner Nigro on fatal 5th alarm at 2363 Prospect Ave #Bronx

She then rushed to the Jacobi Medical Center where she got the terrible news, “That’s when I find out they all dead.”

Mayor of New York City, Bill de Blasio said the Bronx fire was the “worst fire tragedy in at least a quarter of a century.”

Tonight in the Bronx we've seen the worst fire tragedy in at least a quarter of a century. It is an unspeakable tragedy, and families have been torn apart. pic.twitter.com/0kCFMzxt79

Williams’s other sister, Shevan Williams managed to survive the blaze after escaping in time from her first floor apartment.

Shevan said she heard a smoke alarm during the fire but said she initially “wasn’t paying attention to it.”

“I hear them say: ‘Fire! Fire!’ So when I open my door and come out…when I look, it’s a lot of smoke… by the time I get out, now my sister didn’t come out in time behind me,” she said.