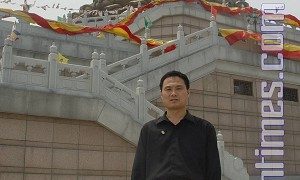 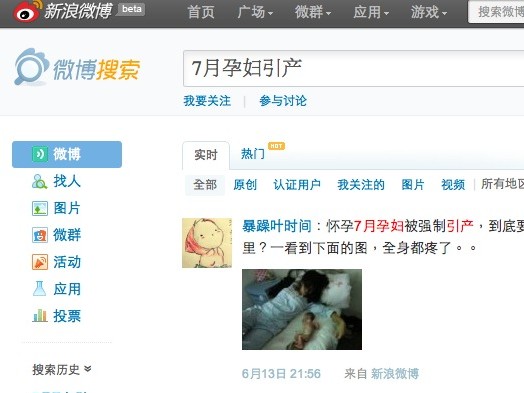 A screenshot taken of the number of posts on the Sina Weibo microblogging site regarding the forced abortion of a seven-month pregnant woman in Shaanxi Province. The small photo in the screenshot depicts the woman, Feng Jianmei, sitting next to her apparently dead fetus. (Weibo.com)
China

After a woman who was forced to abort her child at seven months of pregnancy went public with her story, resulting in punishment of the officials responsible, she was sought out for revenge.

Red banners were hung in her village, presumably by Party representatives, saying “severely beat the traitors and expel them.”

Also, her husband was beaten and detained by local officials.

On June 22, Deng Jiyuan, the wife of Feng Jianmei who was forced to abort their child, evaded the security officers that were trailing him and attempted to travel to Beijing to appeal to central authorities.

“As I was riding the bus to Beijing, more than ten people rushed on board and checked our identification cards. After my status was confirmed, I was taken off the bus and forcibly sent back to my local county,” Deng said in an interview with The Epoch Times.

He was hit on the way back, forced to give testimony on videotape, and then held in a hospital in the nearby Zhenping County, before being released.

Feng Jianmei was carrying what would have been the couple’s second child. After the family was unable to pay 40,000 yuan—described as a fine—to local Party officials, the baby on June 2 was given a lethal injection in the skull which killed it. On June 4 the dead baby emerged.

“The doctor has no humanity,” Deng said in the interview.

The forced abortion took place at a hospital in Ankang City, Shaanxi Province. The family is from the village of Yuping in Zengjia Township of Zhenping County, in Shaanxi.

Public outcry ensued after one of Feng’s friends posted a picture of the mother and dead fetus online. The family also announced plans to sue local officials.

“We are human beings, not animals,” Deng’s sister Deng Jicai wrote on Sina Weibo. “Local government officials cannot treat us like animals to be neutered.

“We haven’t received any satisfaction. What we want is to put murderers into prison. We must get justice for thousands of pregnant mothers,” Deng said.

The case has attracted harsh criticism of the regime online. Law professor Xu Jin described the persecution of the family as “reckless.”

“The stupid government is turning this matter into a shameful testimony about freedom of speech in China,” Lawyer Hu Qi wrote on Sina Weibo, a Twitter-like microblogging service in China which allowed the case to gain the public notoriety it did in the first place.

The family is confused about the labels they have been branded with after going public about the abortion and subsequent abuse. Deng Jicai, the sister-in-law, said: “On the afternoon of June 24 four or five cars loaded full of people came to accuse us of being traitors. I don’t quite understand why you call us traitors. How did we betray the People’s Republic of China?”