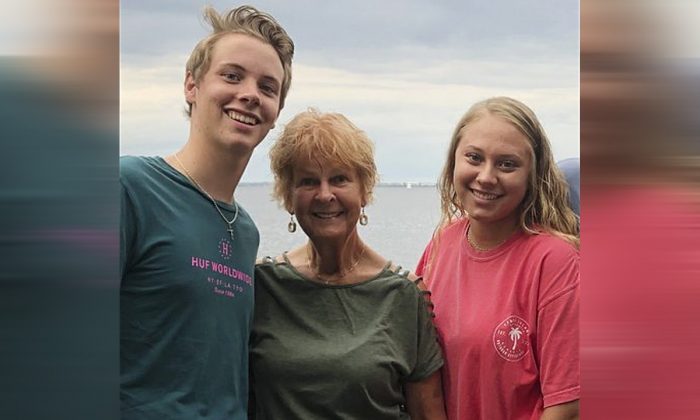 Lynn Fleming is seen with her grandchildren Jonathan and Jensen Fleming. Fleming stumbled and cut her leg while walking in Coquina Beach, near Bradenton, Fla., with her feet in the water during a family visiting from Pittsburgh. Fleming was later diagnosed with flesh-eating disease and died days later. (Wade Fleming via AP)
US News

Mother Catches Flesh-Eating Bacteria While on Beach With Family, Dies Within a Few Days

A 77-year-old mother caught flesh-eating bacteria called “necrotizing fasciitis” on Coquina Beach in Florida and died two weeks later, on June 27—leaving her son and his wife in shock.

“It seems like a ‘Lifetime’ movie really,” her son Wade told Fox10. “I can’t even believe it, that it’s really even happening. It’s just all happening so fast.”

Lynn Fleming was walking on the beach with Wade and his wife, Traci on June 14 when she cut her leg, according to NBC News.

“There was a little depression that she couldn’t see because it was under the water,” Wade told Fox10. “She fell into it, came out with a little ¾-inch cut; a bump on her leg. It was just a small cut, didn’t think much of it. We got the swelling down, but it just kept bleeding.”

A few days after the incident, Fleming visited a doctor who gave her a tetanus shot and prescribed antibiotics, according to Fox10.

Her left shin was black by June 17. “Her friends found her pretty much unconscious and on her bedroom floor,” Traci told NBC News. “They called an ambulance.”

Doctors at the hospital found her to be infected by the flesh-eating bacteria.

Fleming had caught a fever and her leg was swollen. Doctors had to operate upon the infected leg and she suffered two strokes and sepsis while undergoing surgeries. According to NBC News, her entire body was infected with sepsis and she also suffered from kidney failure during this time.

“They can be treated,” said Wade. “You get the open wound while playing at the beach, watch it, take care of it.”

“This is the place she loved,” said Traci. “She couldn’t wait to get down here and retire. She loved the ocean; she loved walking on the beach. Unfortunately, it’s place that took her life by freak accident.”

Traci told NBC News that it was Fleming’s dream to live in Florida and the couple and their two children, Jonathan and Jensen were spending a week with her when the incident happened. “She loved the ocean and she loved walking on the beach,” Traci said.

Wade returned from Flordia to be by her side in her last days. “We spent the entire week with her while she was on life support,” Traci told NBC News.

The news channel says that Traci wrote a Facebook post to make beachgoers aware of the dangers at the beach.

“It is very ironic that she loved the beach so much and could not wait to retire there,” Traci said. “But it’s also what took her life away.”

“It’s heartbreaking. We are devastated,” she said.

In a similar case, a man in Texas dipped his toes in the ocean near Waters Edge Park by downtown Corpus Christi, not realizing that it would lead to severe infection and multiple life-saving surgeries.

Adam Perez, 42, contracted vibriosis, a disease caused by the flesh-eating bacteria called Vibrio, after dipping his toes in the sea last week. Soon after, his right foot and leg began to swell, reported My San Antonio.

According to the Centers for Disease Control and Prevention, Vibriosis bacteria reside in specific coastal waters and are present in high concentrations between May and October when water temperatures are warmer.

People can contract vibriosis by eating raw or uncooked shellfish, particularly oysters, said the CDC. People can also contract it if they expose an open wound to sea or brackish water, as in Perez’s case.

Perez told My San Antonio that doctors prescribed him antibiotics but his infection continued even after several days, leading to a giant blister on his foot.

The ordeal continued and he had to undergo four life-saving surgeries that resulted in the removal of most of his flesh on the right leg.

“I’m never going to be the same anymore,” Perez told My San Antonio. “I know I’m not going to walk normal.”

The CDC said 80 percent of vibriosis cases happen between May and October when the seawater is warmer.

Vibriosis causes an estimated 80,000 illnesses as well as 100 deaths in the United States annually, the U.S. Centers for Disease Control and Prevention says, according to Fox News.