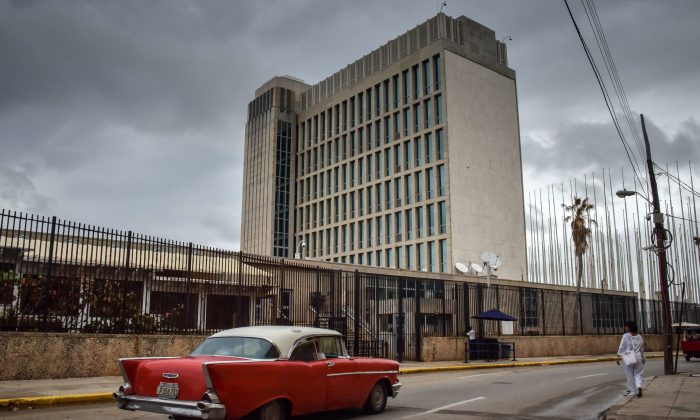 The U.S. Embassy in Havana on Sept. 29. The State Department announced it is pulling all non-emergency workers from Cuba following mysterious attacks on its diplomats.
US News

Most US Diplomatic Staff Pulled Out of Cuba After Mysterious Attacks

The U.S. State Department announced that it is pulling all non-emergency personnel out of Cuba in response to 22 of its staff having been mysteriously injured.

The embassy employees had suffered a “variety of injuries from attacks of an unknown nature” over the past few months.

“The affected individuals have exhibited a range of physical symptoms, including ear complaints, hearing loss, dizziness, headache, fatigue, cognitive issues, and difficulty sleeping,” the State Department said in a statement on Sept. 29.

In response, all non-emergency personnel, as well as all family members, have been told to leave Cuba for their own safety.

“Our Embassy will be reduced to emergency personnel in order to minimize the number of diplomats at risk of exposure to harm,” the State Department said.

The State Department also issued a travel warning to American citizens. It said that the attacks on U.S. diplomats “are known to have occurred in U.S. diplomatic residences and hotels frequented by U.S. citizens.”

The State Department is currently investigating the source of the attacks.

Several days later, on Oct. 3, the State Department announced it had ordered the expulsion of 15 Cuban diplomats from the United States, due to Cuba’s “failure to take appropriate steps” to protect American personnel in Cuba. The diplomats were given seven days to leave the country.

In August, several media reports suggested that the attacks had started in late 2016 and were conducted with sonic weapons.

“My first reaction was that it’s similar to what the Soviets were doing to our diplomats in the early-to-mid 1980s,” Rick Fisher, senior fellow with the International Assessment and Strategy Center, told The Epoch Times in August.

Fisher noted that in the 1980s, the Soviets were using microwave weapons to target diplomats. He speculated the Soviets “might have shared data or even the weapons technology with the Cubans.”

A senior State Department official, responding to a question on a conference call with reporters about whether Russia was involved in the attack, said, “We have not ruled out the possibility of a third country as a part of the investigation.”

The official said that the attacks had not stopped since they were exposed in August.

“These are health attacks, and they are affecting the health and safety and well-being of our staff,” the official said.

President Donald Trump has been a strong critic of Cuba’s communist regime.

“My administration recently announced that we will not lift sanctions on the Cuban government until it makes fundamental reforms,” Trump said in his speech at the U.N. General Assembly on Sept. 19.

“The United States has stood against the corrupt and destabilizing regime in Cuba and embraced the enduring dream of the Cuban people to live in freedom,” he said.

The president has also been a strong critic of the communist and socialist ideologies of North Korea, Cuba, and Venezuela.

“From the Soviet Union to Cuba to Venezuela, wherever true socialism or communism has been adopted, it has delivered anguish and devastation and failure,” he said in his UN speech.

“Those who preach the tenets of these discredited ideologies only contribute to the continued suffering of the people who live under these cruel systems.”

The timing of the attacks is important, Fisher said. They began in late 2016, at a time when former President Barack Obama was easing U.S. trade restrictions on Cuba and ending the “wet foot, dry foot” policy that formerly granted legal permanent residence after one year to Cubans who set foot on the United States.

Fisher noted that while these actions would normally be interpreted as positive for diplomatic relations between two countries, history has shown this is not the case when dealing with Marxist-Leninist regimes like Cuba.

“This is typical of Marxist authoritarian regimes,” he said. “Usually when the U.S. reaches out its hands in friendship without any expectation for in-kind reciprocation, we get our hand bitten.”

Based on this background, he said, it would make sense that a communist regime would view otherwise friendly gestures as a gesture of hostility, and react by attacking American diplomats.

“That’s how a Leninist would respond to American peaceful entreaties. And at a minimum, Cuba is controlled by Leninists,” he said.

Such regimes—including the North Korean communists and the Chinese Communist Party—”are all engaged in significant anti-American activities,” Fisher said.  Such activities may involve developing nuclear or conventional weapons or raising tough political challenges. The Cubans may have decided to join with the approach of other communist regimes, “and also be antagonistic toward the United States.”