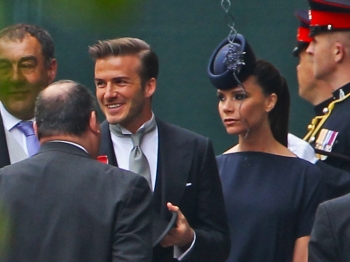 Most Royal Wedding Guests Have Arrived

An hour and a half after royal wedding guests in their elegant attire began filing into Westminster Abbey at 8:15 a.m., local time in London, most of the general guests have shown up.

At about 9:20 a.m., soccer star David Beckham and his former Spice Girl wife, Victoria Beckham, have arrived at the Abbey. According to CNN, Victoria Beckham is wearing a pair of custom-made Christian Louboutin shoes, while her husband is dressed in a Ralph Lauren suit.

The general congregation continued entering the historic venue through its Great North Door until 9:45 a.m. The invitation to the royal wedding of Prince Williams and Catherine Middleton was sent to 1,900 guests.

British royals, governors general and prime ministers of Commonwealth countries, diplomats, and other distinguished guests will start arriving at 9:50 a.m., followed by the arrival of Prince William and his best man and younger brother, Prince Harry, at the Abbey at 10:15 from Clarence House.

Five minutes later, members of foreign royal families, including Princess Victoria of Sweden and Prince Seeiso Bereng Seeiso of Lesotho, will arrive at the venue.