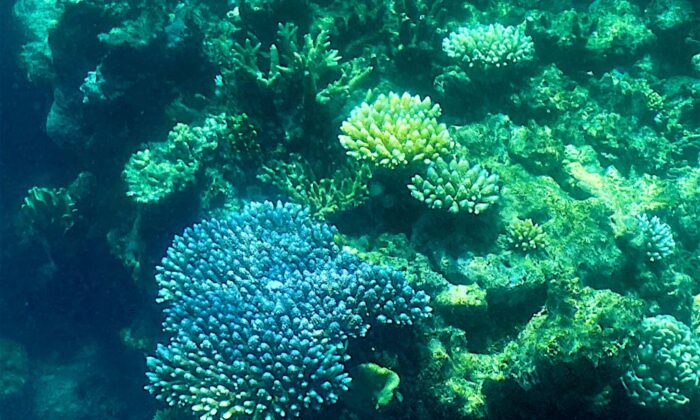 The Great Barrier Reef off the east coast of Australia, on March 7, 2022. (Glenn Nicholls/AFP via Getty Images)
Australia

Two-thirds of the Great Barrier Reef shows the highest levels of coral cover since monitoring of the world’s largest coral reef system began 36 years ago, according to a report by the Australian Institute of Marine Science (AIMS).

Meanwhile, average coral cover in the southern region remains comparably high, but decreased to 34 percent from 38 percent in 2021.

The recovery comes after increasingly frequent coral bleaching events, with the most recent occurring in March.

“In our 36 years of monitoring the condition of the Great Barrier Reef, we have not seen bleaching events so close together,” AIMS CEO Paul Hardisty said.

“Every summer, the reef is at risk of temperature stress, bleaching, and potential mortality and our understanding of how the ecosystem responds to that is still developing.”

Bleaching occurs when the coral is under stress, causing it to expel the colourful microscopic algae that live in its tissue and turn completely white. In this state, the coral is not dead but extremely vulnerable to mortality and disease.

Marine geophysicist Peter Ridd, who has been long outspoken on misinformation regarding the state of the reef, noted that other media still “manage to find bad news in these wonderful statistics.”

“Just ignore them,” he wrote in a post on Facebook. “We must celebrate that our Great Barrier Reef is brilliant.”

“However, we can’t overlook that the fast-growing corals responsible for an increase in coral cover are also those most at risk from marine heatwaves and pest species,” he said.

He argued that the Labor government’s current climate targets are a “political choice” and a “death sentence” to the reef.

AIMS noted in the report that coral reef recovery still isn’t completely understood, making it a continued focus of its research and monitoring.

“This recovery has occurred despite the latest two mass coral bleaching events in 2020 and 2022, which underlines that widespread coral bleaching does not necessarily lead to coral mortality,” it said.

Sub-lethal effects such as reduced growth and larval settlement are understood to have long-lasting effects on the recovery dynamics of coral reefs.

“However, the full extent of these impacts is poorly understood and will only become evident in the future,” the report said.

The AIMS report comes before a UNESCO report that is expected to indicate that the reef system is in a deteriorating state.

In June 2021, a China-chaired United Nations committee recommended that the Great Barrier Reef should be added to a list of “in danger” World Heritage sites.

This was heavily disputed by the government at the time, with former Environment Minister Sussan Ley arguing it was a politically motivated move on the “best-managed reef anywhere in the world.”

A delegation from the United Nations visited the reef during the peak of the 2022 bleaching event in March to assess whether it should be added to the list.

A recent Australian government report also argued that Australia’s ecosystem was at risk of collapse, while omitting important data that contradicted the claims.