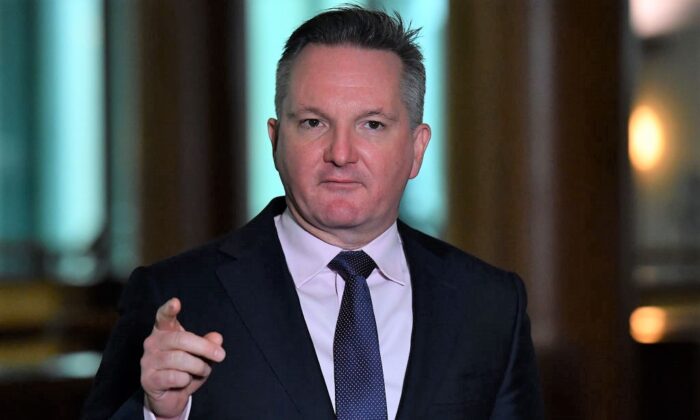 Minister for Climate Change and Energy Chris Bowen speaks to media during a press conference in the Mural Hall at Parliament House in Canberra, Australia, on June 23, 2021. (Sam Mooy/Getty Images)
Australia

The Australian Labor government has struck down an idea to introduce nuclear power into the country, saying it is too expensive and that the “economics don’t stack up.”

The response comes as the opposition Liberal-National Coalition steps up pressure for nuclear energy to deal with soaring electricity costs and lowering emissions, and a trend towards nuclear power investment by China, India, Japan, and South Korea.

Energy Minister Chris Bowen, on June 9, lambasted the suggestion claiming it was the most expensive form of energy and would put pressure on Australians facing cost of living issues.

“Seriously? Nine years in office and then coming up with bright ideas on the other side of the election is point one. No credibility,” he told reporters.

Some people seem to think the answer to high energy prices is to introduce the most expensive form of energy… nuclear.

I was asked today what I think about nuclear energy for Australia 👇 pic.twitter.com/PNLbg9zva6

Treasurer Jim Chalmers echoed his comments, who said nuclear could not compare to renewable energy sources.

“The reason that I am not keen on nuclear energy for Australia is because the economics don’t stack up,” he told Sky News Australia on June 8. “Some of these cleaner and cheaper opportunities—the economics have become so compelling.”

However, the International Energy Agency in December 2020 estimated that nuclear energy production had the lowest expected costs of all energy sources and that only large hydroelectricity dams could compete, but was limited depending on the “natural endowments of individuals countries.”

“Compared to fossil fuel-based generation, nuclear plants are expected to be more affordable than coal-fired plants,” the Agency’s report said.

“Electricity produced from nuclear long-term operation by lifetime extension is highly competitive and remains not only the least cost option for low-carbon generation … but for all power generation across the board.”

The energy debate has taken centre stage in recent weeks as electricity and gas prices skyrocket amid increased global demand spurred by the war in Ukraine that has seen Australian energy producers increase wholesale rates. This has also been coupled with an energy shortfall thanks to coal-fired power stations being shut down for maintenance.

At the same time, there has been criticism levelled at the country’s long-term energy policy, which has increasingly prioritised renewable energy development over opening new coal and gas production facilities—leaving little leeway for the country to deal with supply disruptions.

One solution pushed in recent weeks by the opposition Liberal-National Coalition is for Australia to introduce small modular nuclear reactors as a low-emissions option that can also sustain the baseload needs of the population.

“I’ve written to the Prime Minister asking him to consider nuclear power as part of our energy mix,” David Littleproud, leader of the Nationals, wrote on Twitter on June 8. “We need to have this conversation, and if opportunities exist—back ourselves.”

Littleproud told Sky News Australia that there were many misconceptions around nuclear safety fed by major incidents like Chernobyl in Ukraine, Fukushima in Japan, and also The Simpsons.

“There’s this perception that’s been put around nuclear … etched into folklore from cartoons,” he said.

Earlier in the week, opposition leader Peter Dutton, fired the first salvo of the nuclear debate saying he was “not afraid” to have a discussion about introducing nuclear.

“I don’t think we should be afraid to talk about any technology that’s going to have the ability to reduce emissions and electricity prices,” Dutton told ABC radio on June 6.

Australia currently sits on the world’s third-largest reserve of uranium and is the only G20 nation to ban nuclear energy. Years of cultural aversion—and laws from the 1990s—have prevented governments from developing the industry to tap the resource.

Perin Davey, Nationals deputy leader, said Australia needed to “move on” from the past.

“It’s no longer the 70s and 80s, we no longer have the Nuclear Disarmament Party, and even Greens voters are saying nuclear should be considered because it is zero-emissions power,” she told Sky News Australia on June 10.

While former Nationals leader Barnaby Joyce revealed that he did not speak for nuclear prior to the election because of “polling” and to “keep the party together.”

Then-Prime Minister Scott Morrison was under pressure to commit to higher climate change targets and join the COP26 conference in Glasgow.

He added that he “never really” believed in polling data.

“Every meeting I’ve been to, whether in Gympie … or a business meeting in Sydney, when you ask the room … about two-thirds or three-quarters of people put their hand up.

“Even when you go to [Australian National University], and you talk to students—who are probably more inclined to the left—they support nuclear power.”