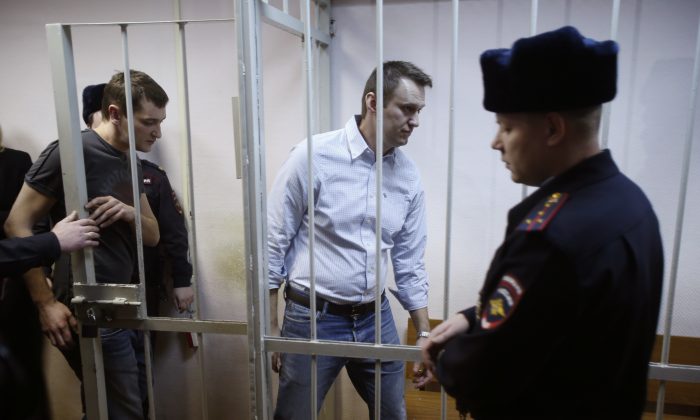 Russian opposition activist and anti-corruption crusader Alexei Navalny, 38, second right, and his brother Oleg Navalny, left, enter into the cage at a court in Moscow, Russia, Tuesday, Dec. 30, 2014. Alexei Navalny, the anti-corruption campaigner who is a leading foe of Russian President Vladimir Putin, has been found guilty of fraud and given a suspended sentence of three and a half years. (AP Photo/Pavel Golovkin)
Europe

Following the house arrest of opposition leader Alexei Navalny on Tuesday, thousands of Russians took to the streets in Moscow in an unsanctioned demonstration.

According to accounts on Twitter, Navalny was photographed walking around among demonstrators before he was arrested again by Russian authorities. Police were seen in the crowds of demonstrators, with one person claiming that “Moscow cops [are] now pushing protesters off” Manezh Square.

Russians share photos from around Manezh Sq in Moscow, where cops are preparing for tomorrow’s protest, 24 hrs early. pic.twitter.com/G2ltaquwqb

Hmm. Live stream seems to show not more than 1000 people at the #Moscow protest so far. pic.twitter.com/OA7C9fY4TB

Here’s the AP update on the arrest:

Police have detained President Vladimir Putin’s chief foe, who has broken the terms of house his arrest to attend a protest of several thousand just outside the Kremlin.

The unsanctioned demonstration on Tuesday came hours after Alexei Navalny, the anti-corruption campaigner, was found guilty of fraud and given a suspended sentence of 3.5 years. His brother was sent to prison.

The convictions are widely seen as a political vendetta against any opposition to Putin and his government.

Alexei Navalny, who has been under house arrest since February, broke its terms to attend the rally and was rounded up by police as he approached the site of the protest.