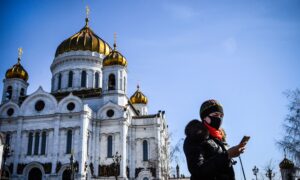 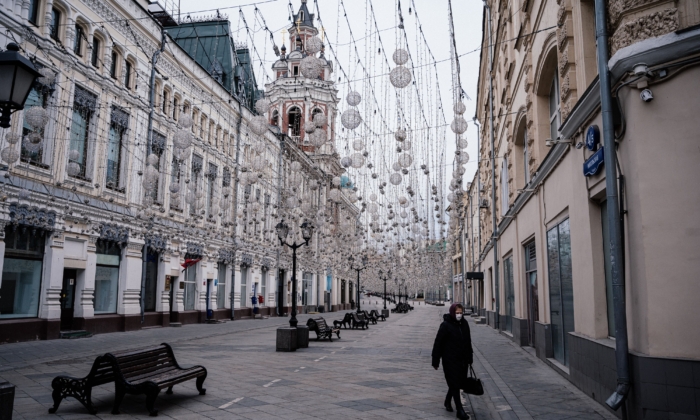 A woman wearing a face mask walks on a deserted street of downtown Moscow on March 30, 2020 as the city and its surrounding regions imposed lockdowns today, that were being followed by other Russian regions in a bid to slow the spread of the COVID-19 infection caused by the novel coronavirus.(DIMITAR DILKOFF/AFP via Getty Images)
WORLD

The mayor of Moscow ordered all residents of the city to stay home, except for essential outings, as the city confirmed more than 1,000 cases of COVID-19.

Residents can only leave their homes for emergency medical help, trips to work for those who are required to continue working, visits to the nearest grocery store and pharmacy, dog walks within 300 feet of a building, and throwing out trash.

Mayor Sergey Sobyanin issued the order on March 29. He had previously ordered the closing of all bars, restaurants, shops, and parks.

Sobyanin noted that some of the residents haven’t been abiding by previous orders. Moscow authorities are working on a system which would require people to carry special passes to travel in the city. Officials are also working on a “smart control system” to monitor movements in the city, according to the mayor.

The lockdown order doesn’t prohibit anyone from entering or leaving the city.

The mayor also asked residents and essential business to abide by social distancing measures, with taxis being the only exceptions.

Prior orders from federal and local authorities reduced the density in the city by a third, according to Sobyanin.

“This is very good. But obviously, not everyone got the message,” Sobyanin said. “Nevertheless, the extremely negative turn of events that we see in the largest cities in Europe and the USA causes great concern for the life and health of our citizens.”

According to Sobyanin, roughly 20 percent of the residents didn’t abide by the previous orders. There is currently no legal mechanism to enforce the lockdown, so police can only issue warnings. The federal government could authorize enforcement measures by declaring a state of emergency, experts told the Kommersant newspaper. Russia hasn’t yet declared a state of emergency.

While Russian President Vladimir Putin last week asked Russians to stay home for a week beginning on March 30, he stopped short of ordering any lockdowns, leaving it to local officials to enact measures. In the northwest region of Karelia, public transport has been shut down. In the city of Ivanovo, police are questioning locals who are outside about their destinations.

Russia reported 302 new cases of the CCP (Chinese Communist Party) virus, commonly known as novel coronavirus, on March 30 for a total of 1,836; nine people died of COVID-19 in the country. Moscow is at the epicenter of the outbreak with more than two-thirds of the nation’s cases confirmed in the capital. The city reported 212 new CCP virus cases on March 30.