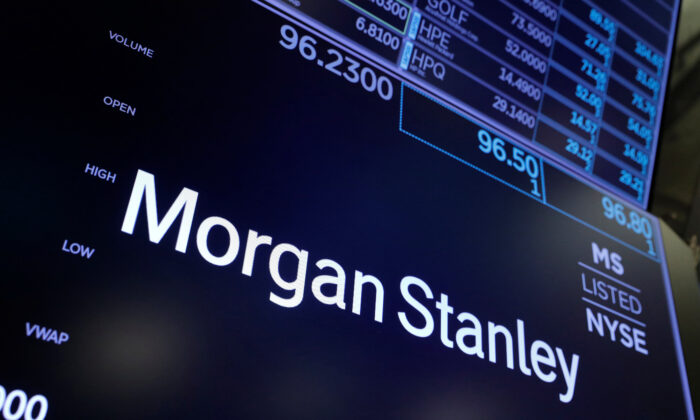 The logo for Morgan Stanley is seen on the trading floor at the New York Stock Exchange (NYSE) in Manhattan, New York on Aug. 3, 2021. (Andrew Kelly/Reuters)
Business & Markets

Morgan Stanley’s profit slumped 30 percent on Thursday, falling short of analysts’ estimates for the first time in nine quarters, as its investment banking business struggled to cope with a slump in global dealmaking.

The U.S. Federal Reserve’s aggressive actions to contain runaway inflation has rattled global financial markets, forcing corporates to curb their appetite for deals, while also slowing their efforts to raise cash through stock and debt offerings.

The turmoil has, in turn, upended a lucrative revenue stream for investment banks, whose results are also facing tough year-earlier comparisons when accommodative monetary policies led to record levels of deals.

Banks could see further pain down the road, as the latest report from Wednesday showed inflation had accelerated again in June, likely adding more pressure on the Fed to raise its benchmark rate.

“Larger transactional M&A will really be dependent on just price discovery and how markets open up over the course of the next six months,” Morgan Stanley Chief Financial Officer Sharon Yeshaya said in an interview.

The bank’s wealth management business, which is seen as a durable source of revenue, did little in the quarter to offset the slump in dealmaking.

Revenue from the business dipped 6 percent and contributed to a 11 percent slide in Morgan Stanley’s net revenue.

Analysts on average had expected a profit of $1.53 per share, according to data from Refinitiv.

The bank also said it had recorded a $200 million expense related to a regulatory matter tied to the use of unapproved personal devices and record-keeping requirements.

Shares of the bank were down 1.2 percent in premarket trade, after dropping nearly 23.6% this year as of last close.

By Niket Nishant and Saeed Azhar