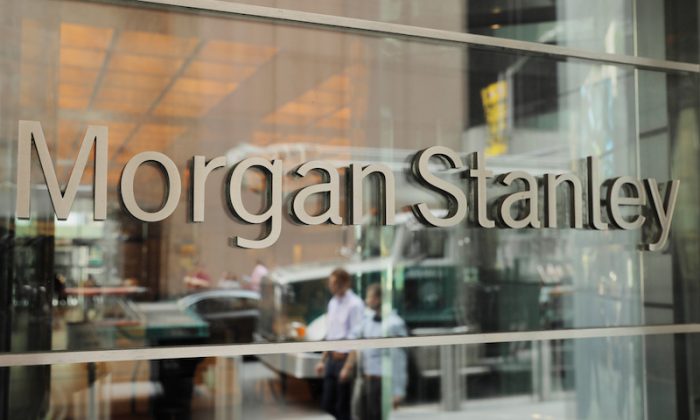 A sign is displayed on the Morgan Stanley building in New York, July 16, 2018. (Reuters/Lucas Jackson)
Companies

Shares of Tesla Inc. were on track for a fifth straight session of losses on May 21, as Morgan Stanley analysts outlined a worst case scenario that could see the electric carmaker’s stock price fall as low as $10.

Another brokerage, Baird, was the latest to cut its price target for the Elon Musk-run company to $340 from $400, saying concerns over demand, credibility, and noise around the company have kept incremental buyers out of the market.

Tesla’s stock, which has almost halved in value since last August, was down another 3% at $199. In the last 10 days, it has gained only once, when the company boosted prices of its Model 3 sedan last week.

It was among Wall Street’s more heavily shorted stocks with about a fifth of its float on the line. Prices of the company’s debt also continued to sink.

Morgan Stanley analyst Adam Jonas, previously a major Tesla bull, said rising debt and geopolitical exposure, including the risk that Chinese demand for the company’s cars could suffer, had led him to cut his worst-case scenario to $10 from $97.

“Tesla has grown too big relative to near-term demand, putting great strain on the fundamentals,” wrote Jonas, rated a five-star analyst by Refinitiv for the accuracy of his forecasting on the company.

“The departure of key executives, price discounting, and extraordinary cost-cutting efforts add to the narrative of a company facing real potential stress.”

The market action follows hot on the heels of a $2.7 billion fundraising round by the company two weeks ago that was oversubscribed but has done little to settle the nerves of holders of Tesla’s existing debt.

Its $1.8 billion high-yield bonds due in 2025 with a 5.3% coupon weakened for a third straight day in European trading, with its price edging below 82 cents on the dollar and the yield up to 9.16% after touching a record high 9.25% overnight.

The spread of its yield over Treasury securities, a gauge of the added compensation demanded by investors for holding Tesla rather than safer government debt, widened to nearly 693 basis points.

By comparison, the average spread on corporate bonds rated “B” – roughly the same as “B-” rated Tesla – is 442 basis points, according to ICE BofAML bond index data.

It was also becoming increasingly expensive to insure Tesla bonds against the risk of default. Its credit default swap prices rose to a seven-month high on May 20 and now reflect a 43% probability of default within five years, according to data from IHS Markit. That is up from around 36% earlier this month.

Jonas, however, kept his equal-weight rating, a price target of $230 and also has a bull-case valuation of $391, a reflection of the split on Wall Street around the company.

Of 31 analysts who cover the stock, 10 now recommend buying Tesla shares, nine are neutral and 12 recommend selling, according to Refinitiv Eikon data. The median price target is $250.19, a fifth above the current market.

While cutting their price target, Baird analysts reiterated their outperform rating, saying Tesla was “positioned to outperform over the long run, as it increases profitability, generates free cash flow and ramps up production of innovating products”.

Jonas also pointed to the potential that the share action may just push the company in a different direction to generate value in the years ahead, raising the prospect of a sale that would fit with its Silicon Valley startup profile.

“Based on our discussions with auto companies, suppliers, and technology firms, Tesla’s strategic value and technical competency in both hardware and software remains extremely high if not in a league of its own,” Jonas said.