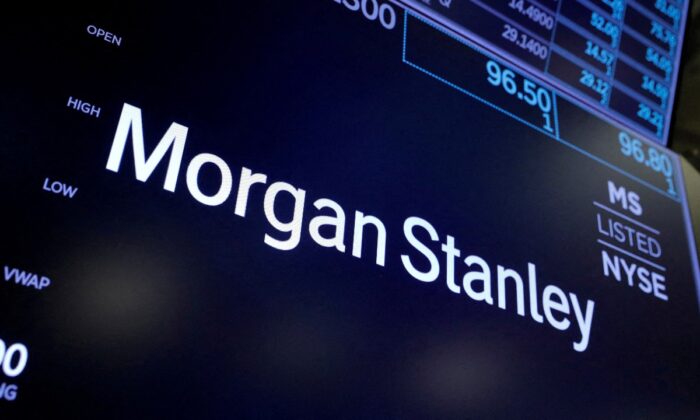 The logo for Morgan Stanley on the trading floor at the New York Stock Exchange (NYSE) in New York City, on Aug. 3, 2021. (Andrew Kelly/Reuters)
Companies

Morgan Stanley reported fourth-quarter profit which beat market expectations, outperforming rivals as its focus on advising wealth clients bore fruit, sending its shares up as much as 3.7 percent on Wednesday.

The Wall Street investment bank also benefited from a boom in global dealmaking and keeping expenses in check at a time when its peers had been hampered with rising wages and technology costs.

Full-year profit, as well as revenue, was a record for the bank, which advised on some of the world’s biggest mergers during the year. Net income surged 37 percent to $15 billion and revenue jumped 23 percent to nearly $60 billion.

The bank also lifted its long-term target for return on tangible capital equity (ROTCE), a key metric that measures how well a bank uses shareholder money to produce profit. It is targeting ROTCE of at least 20 percent, up from 17 percent previously.

“We are increasing our ROTCE goal to reflect the earnings power we see in our business model,” Chief Executive James Gorman told analysts on a conference call.

Since taking over a decade ago, the 63-year-old CEO has transformed Morgan Stanley from a Wall Street firm heavily weighted in money-losing trading businesses into a more balanced bank. He was the driving force behind Morgan Stanley’s decision to acquire Smith Barney, and made wealth management the cornerstone of his plan to stabilize revenue.

The 2020 acquisitions of E*Trade and Eaton Vance for a combined $20 billion doubled down on that strategy, differentiating Morgan Stanley’s focus from its peers.

Shares in Morgan Stanley were up 2.5 percent in morning trading.

Its results rounded out a mixed earnings season for the nation’s largest banks that cashed in on the M&A wave, but were dragged down by weak trading and higher expenses, which swelled as they spent heavily to retain key personnel in a race for talent.

In contrast to some rivals, Morgan Stanley had benefited from bringing technology in-house through its acquisitions rather than having to build it from scratch, Gorman told analysts.

It has also linked pay with performance in its wealth management and investment banking divisions, Gorman said.

Compensation expense was roughly flat during the quarter compared with a year ago.

Revenue from trading fell 26 percent. Equity trading revenue rose 13 percent, but the gains were wiped out by a 31 percent slump in fixed-income trading revenue to $1.23 billion.

Overall revenue rose to $14.5 billion compared with $13.6 billion a year ago.

By Matt Scuffham and Sohini Podder