Over 80 Chinese Cities Under Quarantine Due to Coronavirus 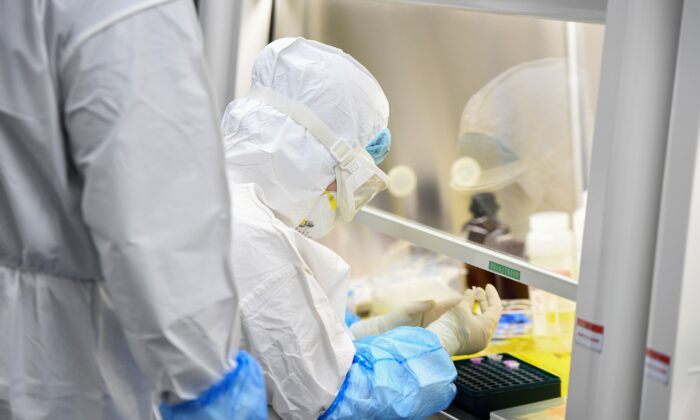 A laboratory technician working on samples from people to be tested for the new coronavirus at "Fire Eye" laboratory in Wuhan, China, on Feb. 6, 2020. (STR/AFP via Getty Images)
By Nicole Hao

Five Wuhan university dorms were converted into quarantine centers for coronavirus patients as the city struggles to contain the disease.

Over the weekend, major cities such as Guangzhou, Shenzhen, and Tianjin have joined a list of over 80 Chinese cities that have enacted isolation measures to prevent the virus from spreading.

On Feb. 7, Hu Yabo, vice mayor of Wuhan City, where the virus first broke out, said at a daily press conference that the city and provincial governments would convert student dorms at four universities and the new campus of the Hubei Province Communist Party training school, all located in Wuhan.

In total, these colleges would supply 5,400 patient beds to quarantine coronavirus patients with mild symptoms.

Netizens who said they were students at those universities began sharing photos on social media, where workers can be seen pulling plastic tarp over students’ beds and throwing students’ belongings onto the floor.

Students from Hanjiang University complained on social media that they were not notified by the school that their dorms were going to be converted into a quarantine center.

At 8:41 a.m. Feb. 8, the school announced the news on its official social media account. Many students commented under the post, complaining about the decision.

“Why use our dorm? Why don’t you use the stadium instead?,” said one user.  “Who can protect my belongings?,” another questioned. “How will you disinfect our dorm before the new semester starts?,” another worried.

Netizens have also shared videos of conflicts between residents and security personnel, as many Chinese in cities held under lockdown begin to feel frustrated that they cannot move around freely.

More than 80 Chinese city governments have launched some form of quarantine measures.

The most strict one is in Huanggang City, also located in Hubei Province. It shut down all public transportation and private vehicles’ travel on roads. It also mandated that only one person from each family household can go outdoors to shop for basic necessities. In addition, that designated person can only go out once every two days.

The most common rule issued by governments is to close down residential areas and villages, but leave an emergency passageway for residents to enter and leave the premises. The passageway is guarded by security personnel; anyone who leaves or enters the area must fill out a form and have their body temperatures scanned.

On Feb. 5 and 6, the northeastern province of Liaoning and Jiangxi Province in the east announced that both locales will be quarantined—meaning residents will not be allowed to attend social gatherings. In addition, only one person per household can go outdoors, once every two days.

Tianjin, one of the four directly-governed municipalities in China, issued isolation measures on Feb. 6, after a 66 year-old woman who shopped at a local department store died from the coronavirus.

Mao Jinsong, director of the Baodi district government in Tianjin, said at a Feb. 7 press conference that 23 residents in the district have been diagnosed or suspected to be coronavirus patients. They all visited the same department store.

Mao added that roughly 9,200 people visited the store between Jan. 19 and Jan. 25, when the woman had visited. All 194 store staff are now being isolated at a quarantine center, while the 9,200 store patrons will be required to self-isolate at home.

In Jinjiang City of Fujian Province, more than 4,000 people are under quarantine after they came into contact with an infected person.

According to Chinese state-run media, a man returned home to Fujian on Jan. 20 after visiting Wuhan, but lied and said he had come back from the Philippines. He attended several parties afterwards.

On Jan. 23, the man started to feel sick. He was diagnosed with the coronavirus on Jan. 27. Seven people who had contact with him were also diagnosed.

The son of a former top Chinese official told the Chinese-language Epoch Times on Feb. 5 that some family members of senior Party officials have been infected with the coronavirus and are receiving treatment at the China-Japan Friendship Hospital in Beijing.

The 2019 Novel Coronavirus (2019-nCov) first broke out in Wuhan in early December 2019. Tens of thousands have been infected within China, while dozens of countries are also reporting cases.