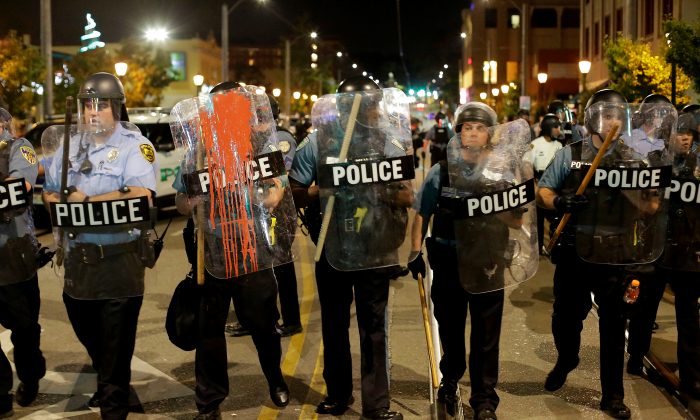 Police officers watch as people march the day after the not guilty verdict in the murder trial of Jason Stockley, a former St. Louis police officer, charged with the 2011 shooting of Anthony Lamar Smith, who was black, in St. Louis, Missouri on Sept. 16, 2017. (REUTERS/Joshua Lott)
US

ST. LOUIS—More than 80 people were arrested on Sunday night as protests in St Louis over the acquittal of a white policeman who had shot a black man turned violent for a third night running.

Police in riot gear used pepper spray and arrested the demonstrators who had defied orders to disperse following a larger, peaceful protest.

After nightfall, a small group remained and the scene turned to one of disorder, following the pattern of Friday and Saturday. Protesters smashed windows and attempted to block a ramp to an interstate highway, police and witnesses said.

At a late-night news conference, Mayor Lyda Krewson noted that “the vast majority of protesters are non-violent,” and blamed the trouble on “a group of agitators.”

Acting police commissioner Lawrence O’Toole struck a hard stance, saying: “We’re in control, this is our city and we’re going to protect it.”

The protests in St Louis followed the acquittal on Friday of former police officer Jason Stockley, 36, of first-degree murder in the 2011 shooting death of Anthony Lamar Smith, 24.

Police reported confiscating weapons including handguns and recovered plastic spray bottles containing an unknown chemical that hit officers, who were then decontaminated.

Thx @STLFireDept for decontaminating our officers that had more unknown chemicals thrown on them downtown. pic.twitter.com/9XJQeoBKO7

“This is no longer a peaceful protest,” St. Louis police said on Twitter earlier.

Police giving order to disperse immediately at Tucker and Pine. This is no longer a peaceful protest. #stlverdict

Chief O'Toole – Those who set out to do damage were arrested & should be prosecuted. This is our city & we will protect it. #STLVerdict

Sunday’s gathering was the largest of the three nights with more 1,000 protesters.

Earlier in the evening a handful of demonstrators threw bottles in response to a police officer making arrests.

As people converged on an unmarked police car holding one suspect, an officer drove through the crowd in reverse to escape, police said. No injuries were reported.

The protests began on Friday shortly after the acquittal on Friday, when 33 people were arrested and 10 officers injured.

By Valerie Volcovici and Kenny Bahr