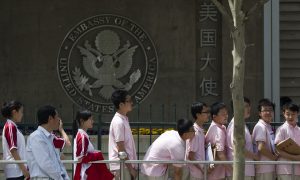 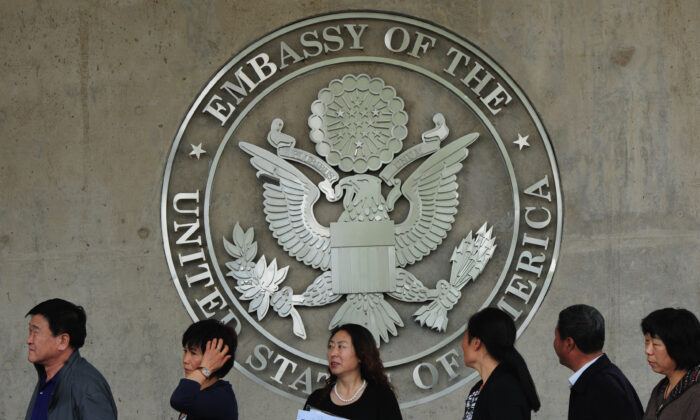 Chinese citizens wait to submit their visa applications at the US Embassy in Beijing on May 2, 2012. (Mark Ralston/AFP/GettyImages)
US-China Relations

More Than 500 Chinese STEM Students Denied Visa to the US

More than 500 Chinese STEM students’ visa applications to study at major American universities were recently rejected by the U.S. government over security concerns, Chinese media reported. The news sparked debate on Chinese social media and netizens claim that most of the student visa applicants are from Chinese universities that have ties to the Chinese military.

On July 7, Chinese state-run newspaper China Daily reported that at least 500 Chinese students who are majored in STEM (science, technology, engineering, and mathematics) were denied visas by the U.S. Embassy and Consulates on the grounds of violating Section 212(f) of the U.S. Immigration and Nationality Act and Presidential Proclamation 10043.

Section 212(f) gives the U.S. president the power to deny entry of aliens or non-U.S. nationals who are deemed detrimental to the interests of the United States. Based on that statute, former President Donald Trump issued Proclamation 10043 on May 29, 2020, titled “Suspension of Entry as Nonimmigrants of Certain Students and Researchers From the People’s Republic of China,” in response to China’s technological theft through its researchers and students studying at American universities and research institutes.

According to China Daily, the visa applicants are all graduate students who have been accepted by American universities—including Harvard University, Yale University, University of California at Berkeley, Massachusetts Institute of Technology, and Johns Hopkins University—to study for a doctoral or master’s degree in the United States. Most of them are studying engineering, computer science, machinery, chemistry, materials science, biomedicine, and other science programs.

After their visa applications were rejected, more than 500 Chinese STEM students co-signed a letter that circulated on Chinese social media, asking the U.S. government to resolve the so-called “discrimination and suppression” of Chinese students.

China’s Foreign Ministry responded to the students’ visa issue, expressing “serious concern” and has made serious protests to the U.S. government, spokesman Zhao Lijian said at a press briefing on July 6.

The news triggered heated discussion on Chinese social media. Some netizens noted that these students all graduated from the seven major Chinese universities affiliated with the Chinese military, known as the “National Defense 7,” and said that they are all going to return to China after they study in the United States. By contrast, many graduates from prominent non-military affiliated universities such as Tsinghua University and Peking University had no issues with obtaining visas to study in the United States.

Some netizens said, “The real number of such Chinese STEM students should be several times of that. The 500 are just the number made known. There must be thousands of such students who got re-assigned or didn’t co-sign the letter.”

The U.S. government is concerned that some Chinese nationals pose as students to gain entry into the country in order to carry out espionage and intellectual property theft. It can be difficult to distinguish Chinese operatives from the real Chinese students studying abroad.

Director of the U.S. Federal Bureau of Investigation Christopher Wray warned in a Senate hearing that the Chinese academic spies are infiltrating all parts of the United States to steal science and technology and pose a threat to American society.

Joe Augustyn, a former CIA official, also stated that the Chinese Communist Party’s (CCP’s) intelligence agencies use some members of the Chinese student population to infiltrate American universities and companies to engage in economic espionage. Augustyn said that the Chinese regime recruits Chinese students to act as “access agents” or “covert influencers” on U.S. school campuses. Once the operations are exposed, the regime could separate itself (the CCP’s intelligence agency) from the students and deny its involvement.

The Biden administration stated on April 27 that it would relax visa restrictions set by the Trump administration on Chinese and other countries’ students studying in the United States this fall.

However, since the announcement, some Chinese students and scholars were denied visas to the United States. In May, a Chinese student’s visa application was rejected by the U.S. Embassy because her father works as a security personnel in China. Soon after, the U.S. Embassy issued a decision letter confirming the U.S. Secretary of State’s instructions to stop issuing visas to the spouses and children of active duty personnel from China’s Immigration Administration, the Ministry of State Security, and the Ministry of Public Security, due to the regime’s human rights abuses and infiltration to other countries.