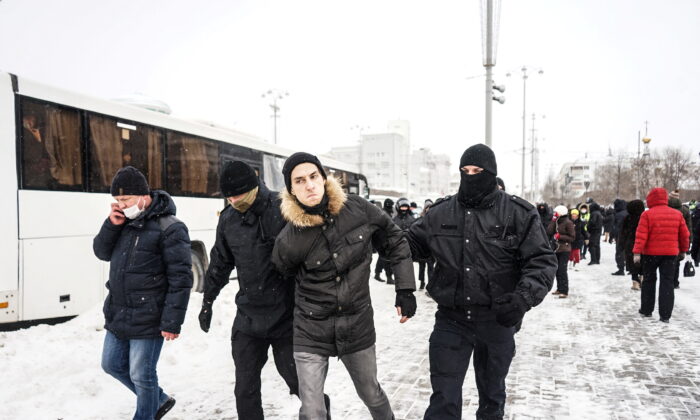 A person is detained during an anti-war protest, following Russia's invasion of Ukraine, in Yekaterinburg, Russia, on March 6, 2022. (Handout via Reuters)
Russia-Ukraine War

More Than 4,300 Detained at Anti-War Protests in Russia

LONDON—Police detained more than 4,300 people on Sunday at Russia-wide protests against President Vladimir Putin’s invasion of Ukraine, according to an independent protest monitoring group.

Thousands of protesters chanted “No to war!” and “Shame on you!”, according to videos posted on social media by opposition activists and bloggers.

Dozens of protesters in the Urals city of Yekaterinburg were shown being detained. One protester there was shown being beaten on the ground by police in riot gear. A mural in the city showing President Vladimir Putin was defaced.

Reuters was unable to independently verify the footage and photographs on social media. Russia’s interior ministry said earlier that police had detained around 3,500 people, including 1,700 in Moscow, 750 in St Petersburg and 1,061 in other cities.

The interior ministry said 5,200 people had taken part in the protests. The OVD-Info protest monitoring group said it had documented the detention of at least 4,366 people in 56 different cities.

“The screws are being fully tightened—essentially we are witnessing military censorship,” Maria Kuznetsova, OVD-Info’s spokeswoman, said by telephone from Tbilisi.

“We are seeing rather big protests today, even in Siberian cities where we only rarely saw such numbers of arrests.”

The last Russian protests with a similar number of arrests were in January 2021, when thousands demanded the release of opposition leader Alexei Navalny after he was arrested on returning from Germany where he had been recovering from a nerve agent poisoning.

Some Russian state-controlled media carried short reports about Sunday’s protests but they did not feature high in news bulletins.

Russia’s RIA news agency said the Manezhnaya Square in Moscow, adjoining the Kremlin, had been “liberated” by police, who had arrested some participants of an unsanctioned protest against the military operation in Ukraine.