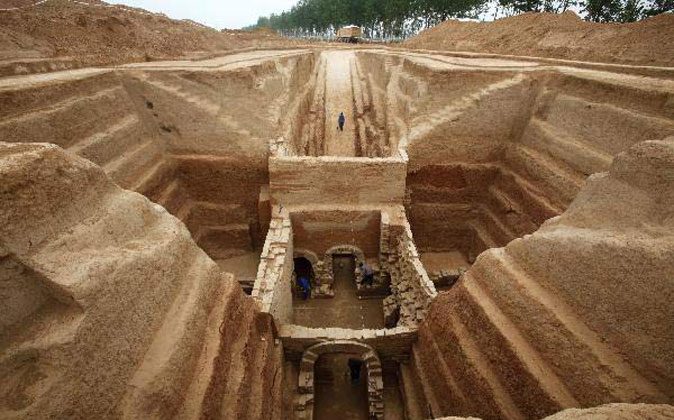 Chinese archaeologists have discovered more than one hundred tombs from the Han Dynasty (25-220 AD) in Jiangsu province, Eastern China. Such a large cluster of Han tombs are a rare discovery and valuable for studies on funeral customs of the time.

Spanning over four centuries, the period of the Han dynasty is considered a golden age in Chinese history. At its height it was one of the most powerful empires of the ancient world, as great in population and power as the Early Roman Empire. Science, technology, the arts and crafts flourished, reaching levels of technical and artistic excellence that match any in the ancient world.

The Han Dynasty left behind abundant cultural relics and over 10,000 tombs constructed for emperors and officials. The Han tombs were mainly made of brick and stone. They were placed deep in the earth in order to remain well preserved.

According to Ma Yongqiang, a researcher with the Institute of Archaeology of Nanjing Museum, the latest discovery of Han tombs was made in Pizhou City underneath a large pool. The tombs were buried only 20 to 30 centimetres beneath the earth and about two dozen of them had been plundered.

The pool’s contractor has asked for 1.5 million yuan (about US$ 240,000) from the archaeologists before allowing them to unearth the tombs, but only 100,000 yuan is available. The city’s cultural bureau are negotiating with the contractor. Archaeologists hope that the newly discovered tombs will provide new insights into the life and culture of the Han Dynasty.