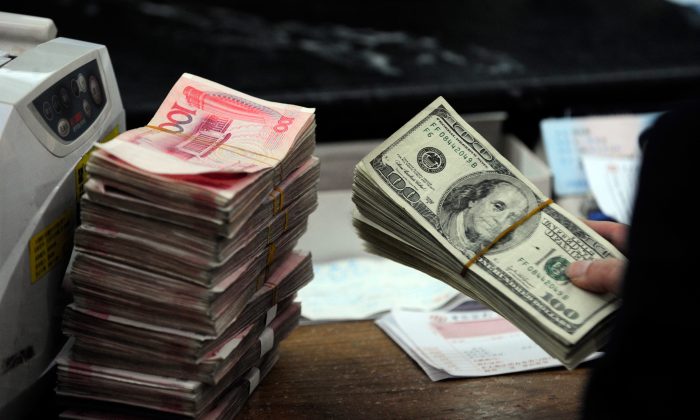 A stack of U.S. dollars together with stacks of 100 Chinese yuan notes at a bank in Hefei City in eastern China's Anhui Province on March 9, 2010. (STR/AFP/Getty Images)
China Business & Economy

China’s private sector is showing signs of distress, if recent stock-market performance and the high number of exits by company executives are any guide.

On Oct. 10, more than 1,000 China A-share stocks fell to their daily limit, as the Shanghai Composite Index ended below 2,600, a level not even breached in the stock-market crash of 2015, according to Bloomberg.

Meanwhile, scores of chairmen and top executives at listed companies have recently resigned. The chairmen of 49 listed companies’ have announced their resignations since July, with more than a quarter of them since Sept. 20, according to data from East Money Information, a Chinese financial and stock information website.

The affected companies span many sectors. On the evening of Oct. 10, Jiangmen Sugarcane Chem, a sugar- and paper-trading company, said Chairman Hu Chengzhong resigned and left the company for personal reasons, less than a year after starting in the role.

So far this year, 385 chairmen at 376 listed companies have resigned, according to Chinese newspaper China Fund, citing data from Wind, a Chinese information service company. There are a total of 3,551 A-share listed companies in China; that means 1 out of 9 listed companies saw its chairman exit.

In addition, more than 8,000 senior executives at listed companies have resigned this year, according to statistics from Zhongtai Securities, a Chinese securities firm.

A chairman’s resignation often hints at larger problems within the company. A survey of companies that had its chairman or other senior executive resign this year, conducted by the state-run Shanghai Securities News, found a correlation between the exits and lowered profits at the company.

The resignations come amid an already volatile environment for private firms, the Sino–U.S. trade war notwithstanding. Recently, mergers with state-owned firms, the public downfall of several founders of major conglomerates, and veiled announcements from Beijing indicate an increased desire for state control over the private sector.

Beijing also recently announced a guideline that instructs city investment companies to file for bankruptcy if they don’t have the funds to repay their debts. Such investment companies are set up by municipal governments, mostly focused on the construction and property-development sectors, and are ways for ordinary citizens and private companies to invest.

The decision to let them go bankrupt was made to ease the enormous amount of debt held by the local governments and to reduce systemic financial risks, Chinese state-owned media said.

But the guideline additionally stipulated the “active promotion of mixed-ownership reform”—meaning that after those investment firms default, the private firms that invested in them will lose their investments. And when those firms face financial instability, they will be forced to undergo mixed ownership and merge with state-owned entities.

Other financial observers suspect Beijing is cracking down on private firms with some company executives being accused of crimes, as with the high-profile case of insurance conglomerate Anbang and its former chairman, Wu Xiaohui, who was sentenced to 18 years in prison for fraud and embezzlement.

Luo Aihua of Shenzhen Kondarl Group, a real estate developer, was detained in August by local police on charges of misusing company funds. She was removed from the company’s board.

In January, Sun Jiexiao, chairman of Suzhou Chunxing Precision, was investigated by China’s securities regulator on suspicion of insider trading. He resigned in July.

Some company chairmen have simply vanished without a trace. At least 11 listed companies’ chairmen have disappeared in the past three years, Shanghai Securities News reported; four of them remain missing.