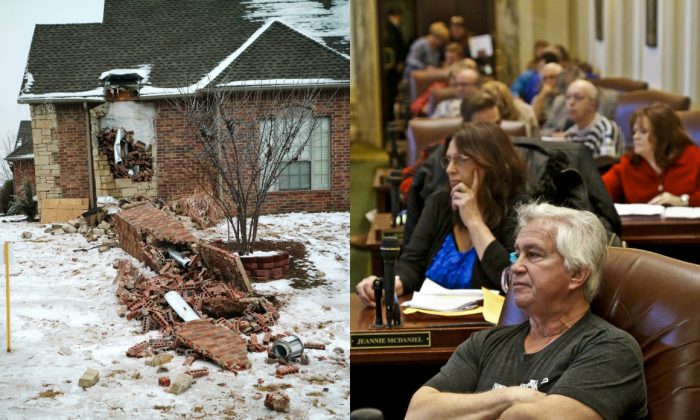 On the left, In this Dec. 29, 2015 photo, remains of a collapsed chimney rest on the ground outside a home in Edmond, Okla., following an earthquake. (Doug Hoke/The Oklahoman via AP) On the right, an earthquake forum at the Capitol hosted by Rep. Richard Morrissette, D-Oklahoma City. Friday, Jan. 15, 2016, in Oklahoma City, Okla. (Chris Landsberger/The Oklahoman via AP)
US

OKLAHOMA CITY—In Oklahoma, now the country’s earthquake capital, people are talking nervously about the big one as man-made quakes get stronger, more frequent and closer to major population centers. Next door in Kansas, they’re feeling on firmer ground though no one is ready yet to declare victory.

A year ago, the states had a common problem—earthquakes caused by the disposal of wastewater from oil and gas exploration. They chose different solutions. Kansas, following early scientific studies, decided to restrict how much and how fast the wastewater could be pumped back underground. Oklahoma instead initially concentrated on the depth of the wastewater injections.

Earthquakes Not Caused by Fracking but Are Man-Made, Says Oklahoma Geological Survey

Developments since then haven’t been reassuring in Oklahoma, where a quake knocked out power in parts of an Oklahoma City suburb several weeks ago and where fears are growing that the worst is yet to come. On Friday, about 200 unhappy residents packed a forum at the state capitol convened by critics of the state’s response. A governor’s task force is studying the problem but officials have so far avoided taking tougher measures.

The quakes, which have been mostly small to medium sized, have caused limited damage, and no one foresees anything like the massive damage and deaths in the famous quakes in California, seismologists say.

Still, “It’s a trend that’s unsettling,” said Cornell University geophysicist Katie Keranen, referring to the increasing number of quakes. Frequent small quakes can be a harbinger of bigger ones. “You have the ingredients you need to have a larger earthquake.”

According to earthquake experts, the pattern fits recent peer-reviewed studies that suggest injecting high volumes of wastewater could aggravate natural faults. In Oklahoma’s six most earthquake-prone counties, the volume of wastewater disposal increased more than threefold from 2012 to 2014.

The past few weeks have been especially nerve-wracking.

Eighty-eight quakes of 2.7 or stronger occurred this January as of Monday at noon central time, more than in all of 2012. The recent quakes have generally been more powerful, too, with eight of magnitude 4 or higher.

“What concerns me is what is happening to our homes through all these earthquakes,” said Mary Beth McFadden of Fairview, a town about 100 miles northwest of Oklahoma City that has had six quakes of magnitude 4 since the start of the year. “It’s your home being put in that position that you have no control over.”

For decades, drilling companies have disposed of oilfield wastewater — the subterranean saltwater that comes to the surface with oil and gas, and liquid drilling chemicals — by pumping it back underground. But in recent years, improved technology has allowed for injecting more wastewater faster so more oil and gas can be produced.

Around here, above the Arbuckle geologic formation of limestone, water under pressure can set off a fault if there’s enough tension, according to interviews with 10 earthquake experts.

“It’s a combination of putting fluid in fast enough and deep enough,” said Stanford University geophysicist William Ellsworth. “The higher rate wells are the ones where there are more hazards associated.”

In 2014, scientists who looked at one swarm of earthquakes found the four highest rate wells were causing most of the pressure changes and problems. Then in June 2015, two different teams published studies pointing directly at volume and rate of injections as the main problem in such quakes.

In March 2015, Kansas regulators ordered a dramatic reduction in injection volumes in the most vulnerable area.

That same month, Oklahoma regulators directed the operators of 347 wells to check the depth of their injections, then three months later issued a broader order to avoid the Arbuckle’s “basement.” But by the end of November, the state had asked for volume cutbacks in fewer than 90 of the about 1,000 wells in a key area.

He said it was not proper to compare Oklahoma to Kansas, which has fewer wells and less wastewater.

Oklahoma’s energy and environment secretary, Michael Teague, said Oklahoma’s approach — which now includes some volume reductions — is working in some areas but not others.

“I like what we’ve been doing so far, but clearly we need to do more,” Teague said.

But oil and gas operators in Oklahoma, where the industry is a major economic and political force, acknowledge their resistance to cutting back on their injections of wastewater.

“A lot of people say we just need the earth to stop shaking, and I understand that, but the fact of the matter is that without the ability to dispose of wastewater, we cannot produce oil and gas in the state of Oklahoma, and this is our lifeblood,” said Kim Hatfield, president of Oklahoma City-based Crawley Petroleum and a member of Gov. Mary Fallin’s task force studying the earthquake problem.

In Kansas, quakes have decreased from an average of nearly 11 earthquakes a month to about three.

“Things are much better than they were; we haven’t had a 4.0 in quite a while,” said Kansas Geological Survey chief Rex Buchanan. “I don’t think anybody is going to declare victory yet.”

Experts say the change over such a short time period could be a blip.

The most recent temblors, including the one that caused power outages and some damage in the Oklahoma City suburb of Edmond on Dec. 29, has exhausted some residents’ patience for a solution.

When the quakes were mostly in thinly populated rural areas, it was “Who cares, right? It’s not in my backyard,” said Keith Gaddie, a University of Oklahoma political science professor. “But then you’re sitting in Edmond and all of sudden your $500,000 house starts to shake, shimmy and shutter. You’re noticing a lot more people are being affected by these, and more voices means more political demand.”