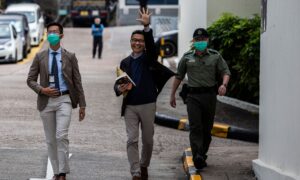 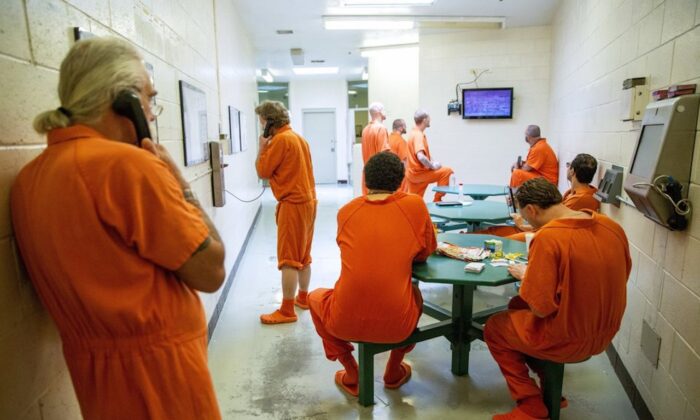 Inmates pass the time within their cell block at the Twin Falls County Jail in Twin Falls, Idaho, in a 2018 file photo. (Pat Sutphin/The Times-News via AP)
CCP Virus

A number of prisons across the United States are considering releasing inmates in an effort to curb the spread of the CCP virus, commonly referred to as coronavirus, as it continues to create a global pandemic.

Prisoners from Santa Rita Jail in Dublin, California, and from jails across Sacramento, Los Angeles, and Cleveland, Ohio, have been released, according to Fox News.

Inmates at the notorious Rikers Island jail in New York City are now reportedly pleading for compassionate release or home detention following the death of an investigator working at the jail. On Wednesday, a union representing corrections officers told NBC that a guard and an inmate at the facility have tested positive for COVID-19.

David Oscar Markus, Rodriguez-Orejuela’s attorney, said that the 81-year-old is “in poor health” and “will not have much of a chance,” when COVID-19 hits his prison, while filing emergency court papers this week seeking his release after serving about half of a 30-year drug-trafficking sentence.

New York City Mayor Bill de Blasio told reporters at a City Hall press conference Tuesday afternoon that the mayor’s office of criminal justice was working to identify people in custody who are at high risk of becoming infected and could potentially be removed from city jails.

“We are evaluating right now, working with the Mayor’s Office of Criminal Justice and the NYPD, the number of people in our jail system who might be particularly high-risk in terms of vulnerability to the virus and another category of people, those that are incarcerated and at low-risk of re-offending,” the mayor said.

“We’re going to evaluate those numbers and determine, case by case, if any of those individuals should be taken out of our jail system. We don’t have a final decision or a final number, but that evaluation is happening today.”

On Wednesday, Cook County Jail in Chicago confirmed it had secured the release of several detainees deemed “highly vulnerable” to the CCP virus.

Cook County Sheriff’s Office spokeswoman Sophia Ansari told NBC Chicago the detainees were being held on low-level, non-violent charges and were at risk of contracting the CCP virus.

The sheriff’s office on Wednesday said that while there are currently no known cases of the virus in the jail, “reducing the number of non-violent, low level offenders in custody, especially those at increased risk due to age or medical condition, is a high priority.”

The debate over whether or not to release inmates comes after the Iranian regime on Wednesday confirmed it has temporarily released 85,000 prisoners, including political prisoners, as the country continues to struggle to contain the spread of the CCP virus.

Iran has more than 1,200 deaths and over 18,00 cases confirmed cases of the disease, according to data provided by Johns Hopkins University. Iran announced that anyone trying to leave the city of Qom who showed symptoms of the virus, including a fever, would be quarantined.

The UK has also this week suggested it may release some prisoners, with General Secretary of the Prison Officers Association Steve Gillan telling SKY News that while there are currently no plans to do that, it may be a possibility in the future.

“Not as yet, previous governments have done executive release and it could come in the future to free up spaces, looking specifically at low risk category prisoners,” he said, when asked if the UK would adopt similar measures as Iran.

“For example, in category D there are about 4,000 prisoners, some are being isolated who have shown signs of the virus, no one to my knowledge has tested positive but they have been isolated in single cell.”

Gillan’s comments come after a report by Prof Richard Coker of the London School of Hygiene and Tropical Medicine said that prisons and detention centers provide ideal incubation conditions for the rapid spread of COVID-19, in a process he refers to as “cluster amplification.”