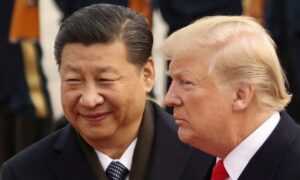 CCP Launches A War to the US? Trump Says 'Conclusive' Evidence The Virus Originated in China
0 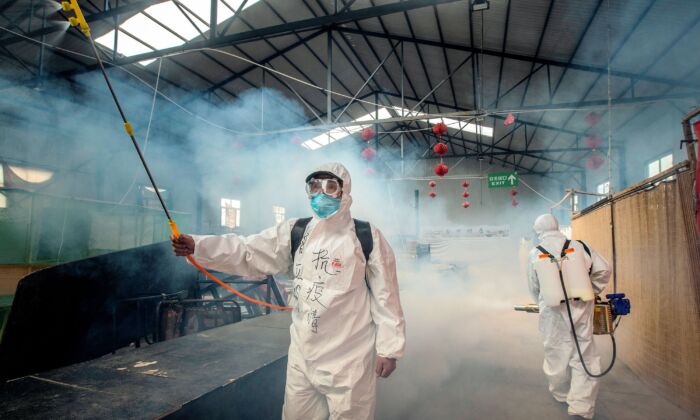 Staff are spraying disinfectant at a market in Suifenhe, Heilongjiang, China on May 6, 2020. (STR/AFP via Getty Images)
INSIDE CHINA

Officially, China’s National Health Commission announced on May 10 that there were 12 new cases in the entire country. But local governments reported more infections than that.

The Epoch Times recently obtained an internal document belonging to the Heilongjiang health commission, in which a medical staff at the Qitaihe People’s Hospital (located in Qitaihe city) reported bad behavior by city authorities.

The medical worker claimed that authorities purposely covered up the local outbreak.

The document, dated April 7, contained details of the medical staff’s accusations: “Now, more than 30 people diagnosed with COVID-19 are being treated at our hospital. But the government has only announced 16 infections.”

Because of the falsified and delayed reporting of data, close contacts of infected people could not be promptly identified and isolated, causing the outbreak to spread, the staff said.

The staffer also alleged corruption. “The leaders at the Qitaihe city health commission were bribed [by manufacturers], and purchased poor-quality protective suits [for local hospitals]. The suits ripped easily, but we have to use them because we don’t have qualified ones.”

In the document, the provincial health commission confirmed that the wife was diagnosed, but denied that there was a cluster outbreak at the hospital.

China’s National Health Commission announced that there were 12 virus patients newly diagnosed on May 9: 11 of them are from Shulan city in northern Jilin Province, and the other case is from Wuhan city in Hubei Province.

The Wuhan case was an 89-year-old man. After he tested positive, his wife and five other residents in the same residential compound also tested positive and were counted as asymptomatic carriers.

The national figure did not capture all the diagnosed patients in China.

Shenyang, the capital city of Liaoning Province, announced on May 10 that a 23-year-old man was diagnosed with the virus on May 9. He is related to the outbreak in Shulan, according to authorities. He traveled to Shenyang from Jilin on May 5, and began to develop symptoms on May 8.

The commission said the patient was a 70-year-old man. He was infected at the First Affiliated Hospital of Harbin Medical University, where he was being treated for colon cancer, high blood pressure, and occupational lead poisoning.

The second wave outbreak in the region first erupted in Harbin, the capital of Heilongjiang, in early April, and has since spread further.

The latest impacted area is Shulan in Jilin Province.

On May 10, Jilin provincial government again upgraded the city to a “high risk region,” after the 11 new cases were reported in one day, who were close contacts of a person diagnosed on May 8.

The government did not explain how the outbreak occurred.

According to state-run website China News Net, the “patient zero” of the Shulan outbreak was a 45-year-old cleaning lady who works at the city’s police bureau. She had not contacted anyone from overseas or other provinces. Since April 23, she had only gone to work; a supermarket and pharmacy for shopping; and her mother’s home in another residential compound.

On May 6, the woman developed symptoms and visited a hospital. On May 7, she was diagnosed.

Then, her husband, three sisters, brother-in-law, a woman who lives at the same residential compound as her mother, and four men who are close contacts with her or her family were diagnosed with the virus on May 9, according to state-run newspaper Beijing Daily.

However, Chinese web portal Sina quoted Shulan local residents on May 9 and reported that the woman was not the “patient zero” either. She was infected by her close friend, a woman who works at a public bath house, and she in turn was infected by a person who recently came back from Russia, according to the news report.

The Shulan city government denied this information and said they were investigating.

On May 10, the city locked down all residential compounds and closed all schools again.

Owing to the pandemic, all schools in China did not open for the new semester after the Chinese New Year holiday. But in April, locales began easing lockdown measures and reopened school for some grades.

On April 7 and 20, classes resumed for seniors in high school and middle school respectively, to allow them to prepare for entrance exams. But such students will now attend classes online again.

On May 8, Ezhou city in Hubei Province announced that a high school senior tested positive during a nucleic acid test and was confirmed to be an asymptomatic carrier.

The student had not traveled to another city, nor taken any public transportation, in recent months. Authorities said it was unclear how the student contracted the virus.

Meanwhile, Chinese web portal Sohu reported on May 5 that at least three students died suddenly after returning to school in the past 15 days. Authorities did not cite a cause of death.