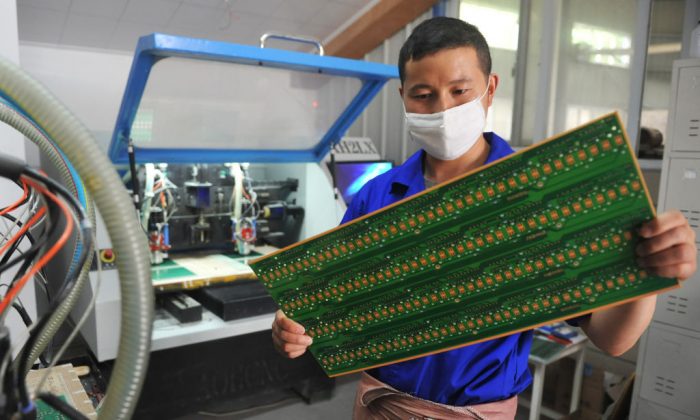 A worker checks a circuit board at a factory in Hangzhou in eastern China's Zhejiang Province, on May 22, 2018. (AFP/Getty Images)
US-China Relations

The recent announcement of an export ban by the U.S. Department of Commerce against Chinese chipmaker Fujian Jinhua has fueled speculation that other Chinese tech companies may soon face similar punishment, Japanese media report.

More than 10 Chinese companies were identified in an April 2018 U.S. congressional report as “subject to export-control risks”—meaning that the United States could exert restrictions on them, the Japanese business daily Nikkei pointed out in a Nov. 2 article.

The U.S.–China Economic and Security Review Commission, a congressional committee that oversees economic issues with China, warned that the U.S. tech industry’s reliance on Chinese suppliers—more than half of the parts used to manufacture tech goods at the top seven IT manufacturers, including IBM, Microsoft, and Intel, originated from China—posed a threat to U.S. national security and economic competitiveness.

The report identified Chinese companies and research institutes, including telecom giants Huawei and ZTE, crystal display maker BOE Global, server maker Inspur Group, asset management group Tsinghua Holdings, and computer maker Lenovo as among tech suppliers that are either state-owned, state-controlled, or have other connections to the Chinese regime, and pose a national security risk to the United States. That report didn’t include Fujian Jinhua.

For example, the report described how Lishen Power Battery System, a supplier to U.S. computer maker Dell, has links to China’s military and spy programs.

The latest export ban is a warning to the rest of China’s tech industry. “The U.S. is using Fujian Jinhua case to demonstrate its ability to kill any of these semiconductor projects or hit top tech companies badly in one day,” Roger Sheng, a Shanghai-based analyst at research company Gartner, said in an interview with Nikkei.

According to Chinese media, Fujian Jinhua was months away from mass-manufacturing its own DRAM chips, a type of semiconductor chip used to power virtually all computers and electronic devices. Currently, the DRAM sector is dominated by South Korean companies Samsung and SK Hynix, and the U.S. memory chipmaker Micron. The three together hold more than 90 percent of the global market share as of the first quarter of 2018.

Days after the export ban, on Nov. 1, Fujian Jinhua was named in an indictment by the U.S. Department of Justice for trying to steal DRAM-manufacturing technology from Micron. Also named in the indictment was Taiwan-based contract manufacturer UMC, who under a cooperation agreement signed with Fujian Jinhua in 2016, was tasked to develop DRAM technologies for the Chinese company.

After the export ban, UMC announced that it halted its activities with Fujian Jinhua.

Industry sources also told Nikkei that two other Chinese chipmakers—Innotran Memory, a DRAM manufacturer located in Hefei City, the capital of eastern China’s Anhui Province; and Yangtze Memory Technologies, a NAND flash memory maker based in Wuhan City, the capital of central China’s Hubei Province—are “subject to high political risks,” meaning that they are also likely to be hit with a U.S. export ban.

DRAM and NAND flash are both semiconductor memory chips that store data within digital products.

According to Nikkei, neither Innotran Memory nor Yangtze Memory Technologies has started to generate revenue because they are still at a limited production stage.

“If any of these chip projects come across a similar ban—that also means the doomsday for those new players,” said Sean Yang, a semiconductor analyst at research company CINNO, in an interview with Nikkei. “It’s not possible for any chip manufacturers in the world to get rid of U.S. suppliers any time soon.”

Within the semiconductor industry, it is widely known that five manufacturers of semiconductor equipment—Applied Materials, Lam Research, and KLA-Tencor based in California; New York-based Veeco; and Dutch company ASML—supply the bulk of integrated circuit (IC) chip manufacturers worldwide.

Fujian Jinhua, Innotran Memory, and Yangtze Memory, all established in 2016, are key participants of China’s “Made in China 2025” industrial plan, according to Nikkei. The plan describes the Chinese regime’s goal of achieving 70 percent self-sufficiency in 10 high-tech industries, including advanced information technology and semiconductor technology.

In March, at a meeting held by China’s rubber-stamp legislature National People’s Congress, Chinese Premier Li Keqiang reiterated the need for stepping up the development of tech sectors such as IC and next-generation mobile communications 5G, according to China’s state-run news site China.com.

In June, China announced it would launch a state-backed fund of 300 billion yuan (about $47 billion) for investments in strategic and emerging industries, according to Reuters. The fund is partially aimed at spurring China’s semiconductor industry, after a similar fund totaling 139 billion yuan (about $22 billion) was created in 2014.