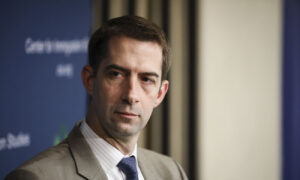 A researcher plants a semiconductor chip on an interface board, at the Tsinghua Unigroup research center in Beijing on Feb. 29, 2016. (Kim Kyung-Hoon/Reuters)
China-US News

WASHINGTON—Opening a new front in its trade and technology disputes with China, the Trump administration on Oct. 29 took action to cut off a Chinese state-backed semiconductor maker from U.S. exports of components, software, and technology goods.

The Commerce Department said it has put Fujian Jinhua Integrated Circuit Co., Ltd on a list of entities that cannot purchase such products from U.S. firms, citing a “significant risk” that the Chinese firm’s new memory chip capacity will threaten the viability of American suppliers of such chips for military systems.

It said in a statement that Fujian Jinhua “poses a significant risk of becoming involved in activities that are contrary to the national interests of the United States.”

The action is similar to a Commerce Department move that nearly put Chinese telecommunications equipment company ZTE Corp out of business earlier this year by cutting it off from U.S. suppliers.

ZTE, which failed to comply with stipulations after violating the sanctions placed on Iran and North Korea, was allowed to resume purchases of U.S. products after a revised settlement and payment of a $1 billion fine.

The action against Fujian Jinhua is likely to ignite new tensions between Beijing and Washington since the company is at the heart of the “Made in China 2025” program to develop new high-technology industries.

The Chinese regime is putting enormous pressure on Chinese companies to increase domestic production of core technologies, with the goal of achieving self-sufficiency and dominating global supply chains by 2025.

The world’s top two economies are already waging a major tariff war over their trade disputes, with U.S. duties in place on $250 billion worth of Chinese goods and Chinese duties on $110 billion of U.S. goods.

Fujian Jinhua, which is starting up a new $5.7 billion chip factory in Fujian Province, is linked to the Trump administration’s accusations that China has systematically stolen and forced the transfer of American technology.

According to media reports, the American chip-maker found itself targeted after it turned down an acquisition offer. Fujian Jinhua and its Taiwanese partner collaborated to lure Micron employees to steal company secrets, Micron claimed.

It was not immediately clear what effect the Commerce Department action will have on Fujian Jinhua’s operations.

U.S. Commerce Secretary Wilbur Ross said in a statement that the Chinese firm’s new plant likely was the beneficiary of “U.S.-origin technology” and its additional production would threaten the long-term viability of U.S. chip-makers.

“When a foreign company engages in activity contrary to our national security interests, we will take strong action to protect our national security,” he said. “Placing [Fujian] Jinhua on the Entity List will limit its ability to threaten the supply chain for essential components in our military systems.”

By David Lawder. The Epoch Times contributed to this report.