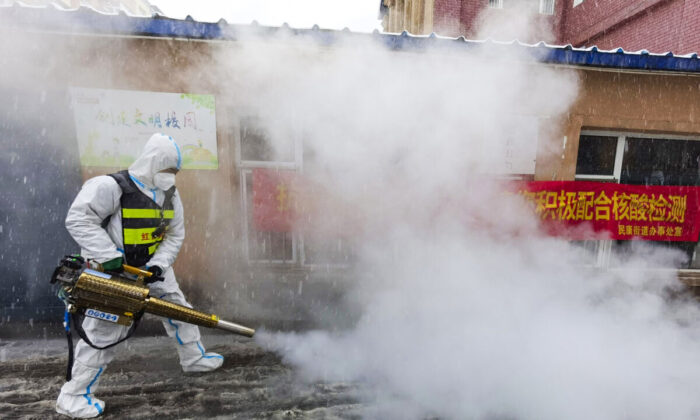 A volunteer disinfects the area as it snows during the COVID-19 lockdown in Changchun in northeast China's Jilin province on March 12, 2022. (Chinatopix Via AP)
INSIDE CHINA

China on March 13 placed two more cities under lockdown, including its southern business center of Shenzhen, amid a fresh spike of COVID-19 cases across the country fueled by the fast-spreading Omicron variant.

The new restrictions came after the country’s leader Xi Jinping and health experts signaled the communist regime might switch to a softer COVID-19 response model.

The Chinese regime currently has a so-called “dynamic-zero” policy that attempts to bring outbreaks under control as soon as possible through measures including mass testing, digital surveillance, mandatory isolation, and targeted lockdowns. Critics say such harsh measures hurt the economy and send ripples through global supply chains.

The cases reported on Sunday were scattered in 19 of the country’s 31 provinces.

While China’s current case count is likely not to reflect the actual total, given that the Chinese regime is known to grossly underreport its virus numbers, the official figure is climbing at the rate that the county has never seen since the first outbreak in Wuhan two years ago.

The flare-up prompted officials in several Chinese cities to step up efforts. Cangzhou, a city south of Beijing, announced a lockdown of its 7 million residents on Sunday. The city authorities said no one was allowed to leave home, according to a notice posted on its official Wechat account.

Shenzhen, a city with 17.5 million people, will be placed under a week-long lockdown while conducting three rounds of citywide testing starting from March 14, according to a Sunday government notice.

The southern tech hub that hosts the country’s tech giants like Tencent and Huawei orders all businesses except those in essential sectors to close or work from home. The city will suspend public transport including buses and subways, read the notice.

In the financial hub of Shanghai, the inter-city bus service will be halted from March 14. The city authorities have ordered its 24 million residents not to leave unless necessary. Anyone entering or leaving the financial hub must present a negative PCR test result.

Jilin Province, where infections accounted for nearly 80 percent of the national total, is stepping up COVID control measures, according to Zhang Yan, deputy director of the provincial Health Commission.

The outbreak reflects “emergency response mechanisms in some areas are not sound enough,” Zhang said at Sunday’s news briefing.

Two cities in Jilin Province have been placed under lockdown since March 11. Changchun city gave its 9 million residents a stay-at-home order, with one household permitted to send one person out to buy necessities every two days. The nearby city of Jilin has been placed under regional lockdown.

Jilin, a city that bears the same name as the surrounding province, is rolling out the seventh round of mass testing of its 3.6 million people on Sunday.

While the city hasn’t announced a citywide lockdown, the authorities send people who received positive results and their close contacts to centralized quarantine centers.

The city is scrambling to complete the construction of an isolation facility with 6,000 rooms, as well as three makeshift hospitals with 10,000 beds for COVID-19 patients, the state-aligned news agency Xinhua said on Sunday. Jilin has built three temporary hospitals with 1,200 beds to deal with patients with mild or no symptoms, stated the report.

The mayors of Jilin city and Jiutai district in Changchun city were dismissed without specifying reasons, Xinhua reported.

Six Chinese Communist Party (CCP) officials, including a deputy chief of provincial public security department, were removed from their roles due to the regional outbreak in Dongguan, a nearby city of Shenzhen, the Party-owned China Daily announced on Sunday.

Sun urged local authorities to stem regional clusters as quickly as they can, in preparation for the CCP’s 20th Party Congress this year.

Top CCP officials will gather to hold the twice-a-decade Party Congress in October or November, during which a new group of top leaders will be chosen. Party leader Xi is seeking an unprecedented third five-year term in office after becoming a paramount leader in 2012.