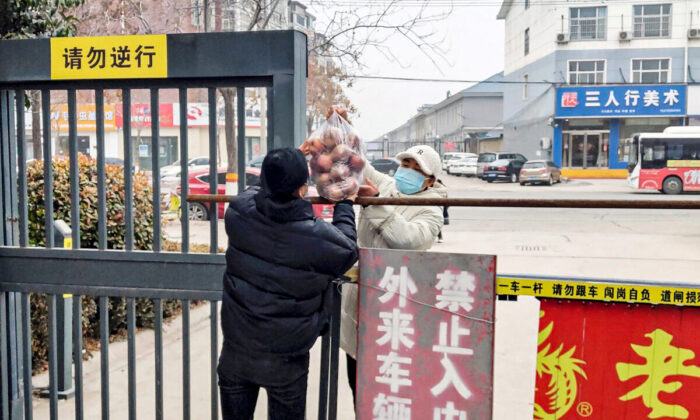 A resident receives food at the entrance of a residental area closed off and restricted due to an outbreak of the Covid-19 coronavirus in Anyang in China's central Henan Province on Jan. 12, 2022. (STR/AFP via Getty Images)
Chinese Regime

Beijing has signaled that it might relax or lift its long-held “dynamic zero” coronavirus policy as China faces mounting economic pressure.

On March 5, Chinese leader Xi Jinping for the first time changed his wording on the pandemic, dropping talk of a “dynamic zero” and instead urging party officials to “hold the bottom line of preventing the COVID cases from massive resurgence,” according to state media. He made this statement in a speech to delegates from the northern Chinese region of Inner Mongolia, who attended an annual conference of China’s rubber-stamp legislature, the National People’s Congress of China.

This is the latest sign that the Chinese regime might switch to a less strict strategy than COVID zero.

“‘Dynamic zero’ is our country’s response during a given period,” China CDC chief epidemiologist Zeng Guang wrote on Weibo, China’s version of Twitter, on Feb. 27. “It won’t remain unchanged forever.”

Although much of his post defended China’s ongoing COVID-zero stance, it predicted that China would ultimately abandon the policy, including mass testing, quarantine, and lockdowns.

“In the near future, [China] will definitely unveil its roadmap featuring China-style coexistence with the virus at a suitable time,” the CDC chief added.

Previously, another China CDC epidemiologist Wu Zunyou expressed on Feb. 15 at a forum hosted by Chongyang Institute for Financial Studies that both private businesses and citizens will face serious pressures just to survival if the policy drags on. Beijing was considering changing its COVID-zero policy as the world was about to embrace full resumption, he said.

Wu also noted that COVID-19 cases would naturally decline even without any curbs imposed, citing India as an example, which experienced a peak in infections in April and May 2021 and then a fast plummet.

Economics professor Antonio Graceffo said that the Chinese Communist Party’s (CCP’s) COVID-19 policies for China were clearly destroying its economy and making people suffer. “A sane choice would be to just end it now,” said the analyst in an interview with The Epoch Times on March 3.

Meanwhile, Graceffo criticized the politics of naming the new policy a Chinese-style roadmap to coexist with the virus. “It is always Beijing’s position that it will not follow what the West does or what other countries are doing or what science would support,” he said. “They’ll invent their own way,” he said of the rhetoric from CCP officials.

Taiwan economist Wu Chia-lung said the impact of the CCP’s COVID-zero policy on China’s economy has been direct and obvious, disrupting supply chains and causing on-and-off production and other social issues, including access to medical care and joblessness for many Chinese people.

Around March 2, districts in Hohhot, the provincial capital of China’s Inner Mongolia, were designated high- and medium-risk areas following reports of new confirmed COVID-19 cases. However, some districts imposed lockdowns while others did not, an interviewee surnamed Feng at Inner Mongolia Normal University told The Epoch Times.

“The CCP officials know COVID-zero is impossible,” Japan-based commentator Chao Jie told The Epoch Times. That explains why the local authorities loosened the ongoing practice in part of the city, he said.