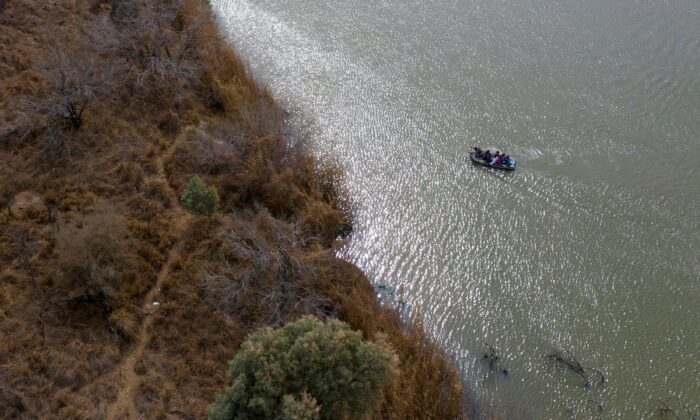 Smugglers use a raft to transport immigrant families and children across the Rio Grande River into the United States from Mexico in Penitas, Texas, on March 5, 2021. (Adrees Latif/Reuters)
Executive Branch

The White House is working on adding more room to house young immigrants who cross the southern border, after a group of senior officials traveled to the border to speak to staffers and children and see the worsening situation firsthand.

Homeland Security Secretary Alejandro Mayorkas and a slew of other Biden administration officials, such as domestic policy adviser Susan Rice, went to southern Texas and toured a Customs and Border Protection facility, along with the newly reopened Carrizo Springs holding facility. No reporters were allowed to accompany the group.

Following the visit, the group plans on briefing President Joe Biden about what they learned, though they hadn’t done so as of Monday. That briefing will include advice on how to increase capacity for the rapidly increasing number of child immigrants arriving at the border.

“We know just purely by the number, that there is going to be a need. Right? Because we have a large number of kids, unaccompanied children, who are coming across the border,” White House press secretary Jen Psaki told reporters at the White House on Monday.

“We’ve made a policy decision, as an administration, that the humane and moral approach is to keep these kids safe and get them into facilities that are safe,” she added. “And our objective remains moving them as quickly as possible out of the Border Patrol facilities. In order to do that, we need to have shelter facilities that are safe; that have access to educational resources, legal resources, health and medical resources; and we need to ensure we have capacity to do that.”

Biden directed the group to “evaluate and understand the situation on the ground,” Julissa Reynoso, chief of staff to First Lady Jill Biden and part of the group, told reporters.

“As you all know, we inherited a broken system, and we have—there are many challenges involved currently. We did speak to many of the folks involved, including children. So it is—we’re trying to manage this in an orderly fashion, but obviously being very mindful of the human costs here, in light of the fact that we are talking about kids,” she said, adding that the group plans to brief Biden soon.

There are no plans for Biden to himself visit the border at this time, according to the White House. Biden received a briefing last week, telling reporters he learned a lot. Asked if there was a crisis, he added, “No, we’ll be able to handle it, God willing.”

The number of licensed beds provided by the Department of Health and Human Services, which is in charge of caring for the minor immigrants, reached more than 13,600 earlier this month—the highest in the program’s history. But officials say not all the beds can be used because of the COVID-19 pandemic and resulting social distancing requirements for the difficulty in housing immigrants, leading to the activation of the Trump-era facility in Carrizo Springs.

As of Feb. 28, approximately 7,700 unaccompanied immigrants, or minors who arrive at the border without parents or guardians, were being cared for across the facilities.

State officials and members of Congress representing portions of states along the borders have raised the alarm about the numbers of illegal immigrants seen recently, with more than 10,000 apprehended in a single Border Patrol District in Texas.

Mayorkas recently asked for volunteers within the department to go to the border as officials deal with the “surge in migration.”

The security official announced March 1 that the Biden administration views reuniting the minors with family members as a “moral imperative” and would take dramatic steps to do so, including potentially flying parents from their home countries and allowing them and the child to remain in the United States.

While Biden administration officials have urged immigrants not to come to the United States for now, some immigrants see the administration’s shift of immigration policies as welcoming, such as allowing asylum seekers to wait in America instead of being forced to hold outside the country.

“Now there’s hope,” a former police officer from Honduras who was planning to file for asylum told The Associated Press.