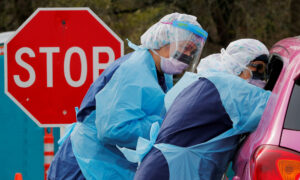 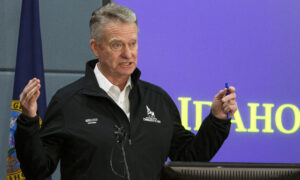 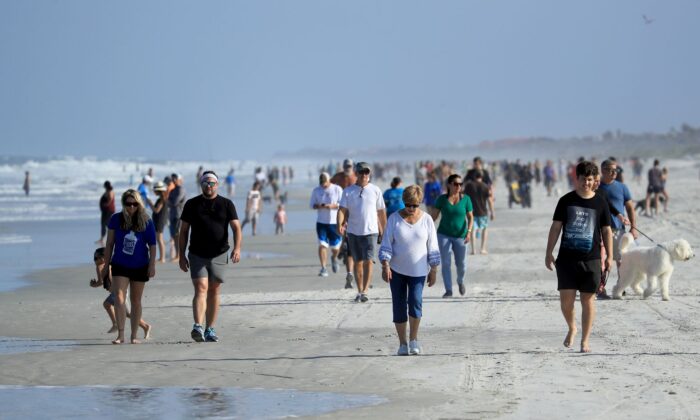 People are seen at the beach in Jacksonville Beach, Fla., on April 17, 2020. (Sam Greenwood/Getty Images)
AMERICA

More Beaches in US Are Reopening

Beaches are reopening at a swift rate in some of the United States’ sun-soaked southern states.

And whether you’re ready to pounce on the sand or are monitoring the situation uneasily from your living room, the reality of Americans getting out and about is upon us.

There’s likely no stemming the tide of openings as officials push to allow people out and restart the economy, but we can approach every loosened restriction with the kind of thought our new socially distanced reality deserves.

That’s a fair question, given the scene last week when Jacksonville, Florida, welcomed back beachgoers.

The 5 p.m. opening on April 17 prompted delight from many cooped-up residents and considerable online scorn from critics worried that lax social distancing will increase the spread of the CCP (Chinese Communist Party) virus, commonly known as the novel coronavirus.

Beach openings and closures are a patchwork across states, a mishmash of overlapping state and local orders that reflect the fits and starts of the wider CCP virus response.

In South Carolina, beach accesses reopened on Tuesday with the lifting of Gov. Henry McMaster’s executive order, although some communities have retained local restrictions and checkpoints to limit access.

Some beaches have also opened in North Carolina, where a stay-at-home order has been extended until May 8. In Mississippi and Texas, beach openings are decided at the county level, while Alabama’s beaches remain closed.

In Georgia, beaches were allowed to stay open under a statewide stay-at-home order that went into effect on April 3, overturning some local beach closures implemented by coastal communities.

Most beaches are open for limited hours and only for non-stationary exercise such as walking, jogging or swimming. Fines for sitting and sunbathing are in effect for some locations, although the level of enforcement remains to be seen. Many parking lots and facilities remain closed.

How You Can Be Safer at the Beach

The good news? In and of itself, a beach outing isn’t a bad proposition, said Dr. Daniel Griffin, an infectious diseases specialist at Columbia University.

“Going to an uncrowded beach with your social cohort or ‘quaranteam’ can be a safe and fun experience,” Griffin said via email. “The challenge is limiting the number of people on the beach so social distancing can be done.”

Schaffner would like monitoring to make sure American beachgoers are following social distancing protocols. Coastal communities could employ extra people to nicely approach and remind beach visitors about masks and keeping a safe distance, he said.

“My experience of beaches is that unless the beaches are remote, you will find real difficulty in keeping to the six-foot rule,” he said.

He’s not confident that people are adhering closely enough to the measures needed to reduce the risk of the CCP virus transmission at beaches—or elsewhere.

Thinking through any outing is key to mitigating the risks, Schaffner said, and beachgoers should be wearing masks when they’re around other people.

Parking lots can be especially problematic in terms of close proximity to other visitors.

He suggests going at an off hour, although many beaches are only open for several hours in the morning and evening.

“You arrive, you put on your mask as you get out of the car to make sure you won’t encounter anybody and then you go down to the beach. If there’s nobody there, you can take your mask off,” he said.

“Do your exercising, and as you walk back to the parking lot, put it back on until you can get into your car safely again.”

This new normal is going to be with us for a very long time, Schaffner said, and adopting these practices is part of increasing our safety.