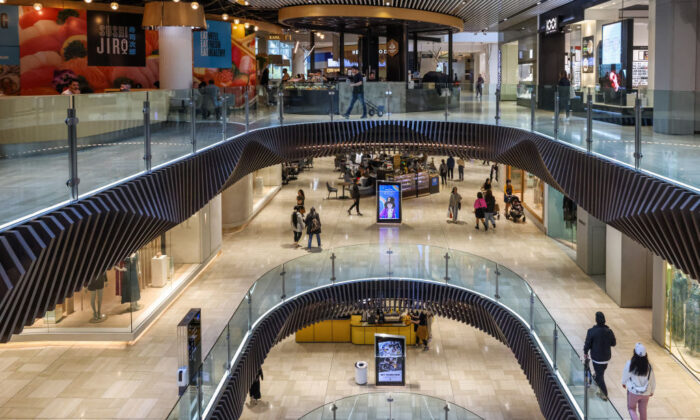 A general view of shoppers in a shopping mall in Melbourne, Australia, on May 3, 2022. (Asanka Ratnayake/Getty Images)
Australia

An increasing number of Australians are mentally prepared for a significant interest rate hike after the Reserve Bank of Australia (RBA) lifted the cash rate for the first time in more than a decade.

According to the Westpac-Melbourne Institute consumer sentiment survey for May, over three in four respondents (77 percent) anticipated mortgage interest rates to go up over the next 12 months, up from 70 percent in April.

In addition, over half of those surveyed expected interest rates to climb by more than one percent over the next year, a sharp increase compared to only a third of respondents a month ago.

At the same time, the survey’s confidence index slumped by 5.6 percent to the lowest level since August 2020, when the second wave of COVID-19 lockdown struck Victorian residents.

If not taking into account the mental toll of the pandemic over the past two years, the drop in confidence was one of the most significant since the Coalition rolled out its poorly received federal budget in 2014.

“Having now begun its tightening cycle, the [RBA] board is almost certain to follow up the move in May with a further move in June,” Evans said.

The RBA board will hold its next meeting on June 7.

More specifically, online job advertisements shot up by eight percent to 311,100 in April, reaching the highest level since January 2006.

The figure represented a 33.3 percent increase compared to the prior year and was 84.9 percent higher than the pre-COVID-19 level.

Commonwealth Securities senior economist Ryan Felsman said the above results pointed out to a potentially positive outcome for the April labour force survey due on May 19.

Economists from Commonwealth Bank of Australia Group predicted that employment rose by 30,000 in April while the unemployment rate potentially dropped to 3.9 percent, the lowest level since September 1974.

Despite many businesses reaching a turning point after the pandemic, credit agency CreditorWatch warned that a number of factors could adversely affect the economy’s positive outlook.

It also warned that more companies would fall into insolvency in 2022.