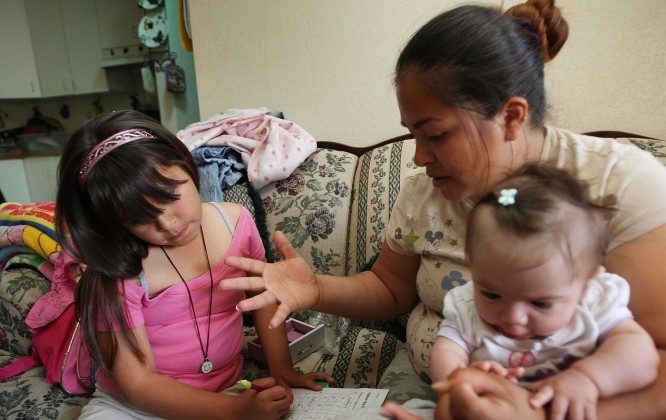 A single, Hispanic mother of five children helps her seven-year-old daughter with homework while holding her five-month-old baby in this file photo. A recent study has shown a significant rise in unwed births since 1970, and deterioration of the American family. (David McNew/Getty Images)
US

Unmarried women give birth far more often today than they did 40 years ago. It’s not teens but adults in their 20s and 30s who are contributing to this increase the most. The structure of the American family is changing too, as an increasing percentage of women who give birth out of wedlock live with the father of the baby.

These findings are from “Child Trends Research Brief,” published in November 2011, which draws upon data from the National Vital Statistics Reports and National Center for Education Statistics in the Department of Education. Child Trends is a nonprofit, nonpartisan research center that studies children.

Unwed births have increased a great deal for slightly older mothers. In 1970, women 25 and older accounted for only 18 percent of all nonmarital births. By 2009, they accounted for 41 percent.

Assuming birth rates are similar for women 20–29, and combining the teen data with the 20s data, it appears that today, the majority of births for women under 30 are nonmarital.

Deterioration of the American Family

Historically, black women had higher rates of nonmarital births. The late New York senator, sociologist, and diplomat Daniel Patrick Moynihan caused a stir when he wrote the Moynihan Report in 1965 in which he said the “fundamental source of the weakness of the Negro community” lies in the “deterioration of the Negro family.” In the 1960s, the accepted term for this minority was Negro. It was later replaced by black or African-American. Dr. Moynihan called attention to the fact that nearly a quarter of the births by black women were nonmarital.

Moynihan died in 2003. If he were alive today, he would be alarmed that the high percentage of nonmarital births in the black community has spread to the white and Hispanic communities. According to the “Child Trends Research Brief,” 29 percent of births to white women are outside of marriage. This was an increase from 17 percent in 1990.

Thus, there is now an even higher rate of unmarried births by white women than Moynihan found in 1965 for black women.

Moynihan’s thesis in the 1960s, attributing the breakdown of the black family as the source of other social problems, such as poor socialization of youth, is now widely accepted by social scientists.

More statistics round out a new picture of the American family.

Contrary to common perceptions, fewer than half of all nonmarital births are firstborns. In 2009, the majority, 59 percent, was second or higher order births. For example, in the older 20s age category (25–29), three-fourths of births to unmarried women were higher order births.

According to the study, formal marriage may be losing its appeal, and cohabitation replacing it. A child born to an unmarried woman is more likely now to be born into a family with two unmarried parents.

According to the brief, in 2001, 52 percent of all births outside of marriage occurred in a family of cohabitating adults, compared to 38 percent in the early 1990s. The cohabitating relationship varies greatly by race and ethnic group. Only 30 percent of black couples are cohabiting when their child is born.

It is well to bear in mind that the increasing number of births outside of marriage cannot be understood without also taking into account the effects of poverty and education, which are not analyzed in this study.