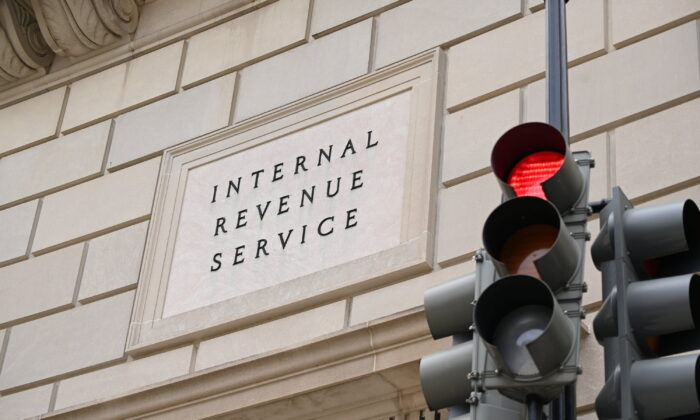 More Americans expect the IRS to put a greater focus on low- and middle-income households and small businesses than on the wealthiest Americans and large corporations, according to a new survey.

About 36 percent of respondents think the tax collecting agency will use its 87,000 new agents to audit low-income earners, middle-class Americans, and small businesses, a recent Convention of States Action/Trafalgar Group poll reveals.

Fewer than one-third (32 percent) say the federal government will audit wealthy Americans and large corporations, while nearly 16 percent believe the agency will employ its thousands of new employees “to target the political opponents of those in power.”

A recent Morning Consult-Politico survey found that 45 percent of respondents are concerned about the IRS boosting its number of audits. Twenty-four percent reported worrying about being personally audited by the IRS, while 22 percent think middle-income earners will be heavily targeted by the tax agency.

Since the Inflation Reduction Act of 2022 was enacted, President Joe Biden and his administration have repeatedly promised that households making less than $400,000 won’t face higher taxes or audit rates. Democrats also have claimed that the $80 billion in additional IRS funding will be used to improve taxpayer services.

So, are these concerns justified? The numbers within the legislation—and historical data—might support many Americans’ fears.

According to the Inflation Reduction Act, $46 billion, or 58 percent of the new money, will be utilized to bolster “monitoring and compliance.” Just 4 percent, or $3.2 billion, will be spent on improving taxpayer services.

A recent analysis by House Republicans estimates that individuals earning an annual income of $75,000 or less would face close to 711,000 additional IRS audits. In addition, Americans earning more than $1 million would receive more than 52,000 audits.

“Value shoppers at Walmart and other retailers, already struggling with higher prices and more expensive fuel to drive to the store, will get hit with 710,000 additional audits thanks to the Manchin–Biden Democrat bill,” said Rep. Kevin Brady (R-Calif.), the ranking Republican on the House Ways and Means Committee, in a statement. “Every retailer in the United States who cares about their hard-hit customers should be fighting to block this unnecessary harassment of hard-working Americans.”

Last year, when the White House proposed to increase funding for the IRS by $80 billion over 10 years, the Congressional Budget Office (CBO) warned that audit rates “would rise for all taxpayers.”

The nonpartisan Joint Committee on Taxation (JCT) estimates that up to 90 percent of the revenue generated from new audits will come from taxpayers reporting less than $200,000 a year in income.

A March 2022 study by the Transactional Records Access Clearinghouse (TRAC) at Syracuse University discovered that low-income households making less than $25,000 are five times as likely to be audited by the IRS as everyone else.

“With this added force, I imagine it will be like the Wild Wild West. Taxpayers and small businesses should expect the IRS to be much more aggressive, by way of audits and other methods, in collecting tax money owed in the coming weeks, months, years,” Scott Curley, the CEO and co-founder of FinishLine Tax Solutions, told The Epoch Times.

Critics also assert that the administration is shifting the goalposts by claiming that the share of audits won’t change for low- and middle-income households and small businesses.

White House press secretary Karine Jean-Pierre told reporters that there would be no new audits on anybody making under $400,000 a year. However, in an Aug. 10 letter to IRS Commissioner Charles P. Rettig, Treasury Secretary Janet Yellen referenced the share of audits compared to recorded levels.

“Specifically, I direct that any additional resources—including any new personnel or auditors that are hired—shall not be used to increase the share of small business or households below the $400,000 threshold that are audited relative to historical levels,” Yellen stated.

“The bottom line is this: These resources are absolutely not about increasing audit scrutiny on small business or middle-income Americans,” Rettig said in an op-ed on Aug. 25. “The investment of these important resources is designed to support honest, compliant taxpayers. Our investment is designed around a Treasury directive that audit rates do not rise relative to recent years for households making under $400,000.”

But not all industry professionals believe these pledges.

Are there other solutions the federal government could employ that does not involve concentrating audit efforts on middle-class Americans and small-business owners?

“Regardless of the situation, there is always a solution for taxpayers and small businesses that owe a great deal. It just comes down to understanding their options, not panicking, and figuring out what works best in their current situation,” Curley said.

“Now, with the added investment in the IRS, there isn’t time to procrastinate,” he added. “It will only be a matter of time before the government takes a closer look at their taxes. It isn’t a crime to owe taxes, but it is a crime not to file.”

The National Federation of Independent Business (NFIB) sent a letter to the House and Senate, outlining various concerns over components of the bill that would impact small businesses.

“This legislation’s heavy focus on enforcement rather than resolving the tremendous paperwork backlog is a disservice to small businesses and taxpayers,” NFIB Vice President of Federal Government Relations Kevin Kuhlman wrote in the Key Vote letter. “The IRS is grappling with over 21 million unprocessed paper returns, an issue that is consistently reported to NFIB as a major issue for many small business owners.”

The NFIB recommended better legislative and regulatory certainty and “relief from regulations and mandates” that add to operating costs.

Sen. Mike Crapo (R-Ida.) offered an amendment to the Inflation Reduction Act that would ensure small businesses earning less than $400,000 would be protected from expensive and time-consuming audits. The proposed amendment was rejected with a 50–50 vote.

Armstrong suggested that it would be better for taxpayers if the legislation enacted “was easier to understand and that was more easily executed.”

Armstrong says customer service has also been a horrendous issue for the IRS over the last couple of years. As a result, the funding could be utilized to install “better lines of communications with not only the public but also with the professional community.”

“COVID-19 was a tipping point for the horrendous service by the IRS, but the decline was already in progress,” he said. “I hope that the additional funding will be used wisely and not just for a political agenda.”