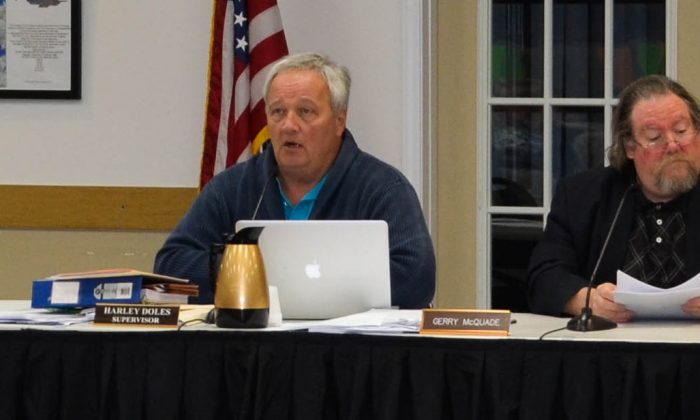 Moratorium a Multifaceted Challenge for Monroe

The Monroe Town Board approved a 90-day building moratorium on April 25 with Supervisor Harley Doles the only abstention. Swirling under the surface are a diversity of positions that tell a larger story.

Emily Convers, executive director of United Monroe, says her organization supports the idea. “We think that in the interest of updating and revising the comprehensive plan, taking a look at the accessory apartments code, and hopefully instituting a tree code, during this period is a very wise idea and is just how good government operates.”

Kiryas Joel officials have taken the stand that they oppose the moratorium, but Convers maintains they actually support it. “The proposed annexation of 507 acres comes into play,” she said.

The proposed acreage is owned by LLC development interests, according to Convers, who want to build as soon as possible to recoup their investment. They were led to believe the annexation would happen quickly in 2013, a month after Doles was reelected.

“The KJ government thought, with their board stacked the way it was, that this annexation would just fly through,” Convers said. “What they didn’t anticipate was United Monroe would stay afloat even after this election and would stay strong, would raise money to hire attorneys, and would watch them like a hawk throughout this process.”

Convers says KJ leaders want the annexed land in their village because the high-density housing to be built will give the village $25,000 for every water hookup per unit that is built. This adds up, according to Convers.

The LLCs have agreed with KJ to pay $25,000 for every unit built on an acre. “So if you’ve got 18 to 20 units built on an acre, that times $25,000 is a hellava lot of money per acre. We did the math and it’s a quarter of a billion dollars that they expect to make on the annexed acres.”

A leader of the KJ Alliance, David Falkowitz, said a short building pause is good for the town. He would like to see the annexation controversy resolved in a neighborly way. “No one has to be given what they want, but things can be worked out.”