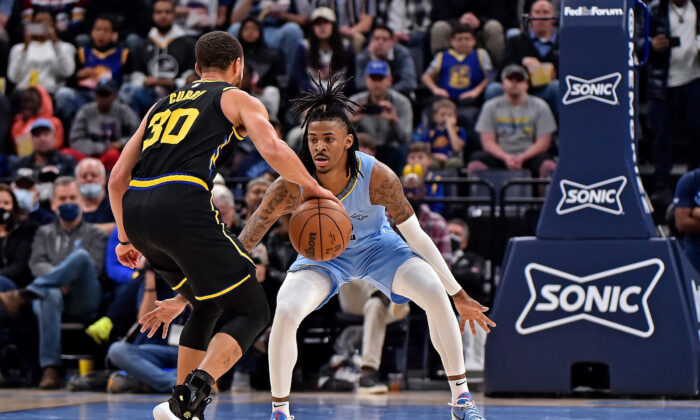 Ja Morant #12 of the Memphis Grizzlies guards Stephen Curry #30 of the Golden State Warriors during the second half at FedExForum in Memphis, on Jan. 11, 2022. (Justin Ford/Getty Images)
NBA

Morant Leads Memphis Over the Warriors 116–108

Ja Morant led the Grizzlies to their 10th straight win, the longest in franchise history, over the visiting Golden State Warriors Tuesday night; making them the hottest team in the NBA.

Morant started the game very aggressively attacking the basket, and the Grizzlies clamped down on defense to eventually take their biggest lead, 49–31, on Morant’s basket with 6:13 remaining in the first half.

“I was very aggressive early and I made them change their defensive scheme,” said Morant. “If you blitz me, I feel like I have a lot of guys who can score the basketball; taking what the defense was giving us. We did a real good job. We got a big lead early on. Obviously, (the Warriors are) one of the greatest teams in the game right now. They made a run … came back, even took the lead, but we didn’t give up, we just kept fighting, kept playing, kept battling, and able to come out with a win.”

Five other Grizzlies scored in double digits. Ziaire Williams and Tyus Jones, off the bench, both scored 17. Brandon Clarke came off the bench for 14 points, Jaren Jackson Jr. added 13, and Desmond Bane had 11.

The Warriors picked up their defense to go on a run, ending the first half down eight points 51–59.

“At halftime they had five threes,” Morant said. “Our job was just trying to run them off the line, and force them into tough twos. And I feel like early on we did that. Obviously, when they went on a run they got going from three and we just had to lock in even more. Try to make their shots even tougher. Now we got some stops which fueled our offense, and we got good shots on the other end.”

Stephen Curry led the Warriors with a triple-double; scoring 27 points from 8 of 21 shooting, 2–9 from threes, 10 rebounds, and 10 assists. Curry had been slumping the last several games as the Warriors have lost three of the last four games.

“It was just turnovers early in the game, and that gave them a lot of confidence,” said Curry.

Four other Warriors scored in double digits. Klay Thompson contributed with 14 points in his limited minutes since returning from injuries. Andrew Wiggins and Gary Payton II, off the bench, both scored 13; and Jordan Poole added 12 points.

Curry hit a 25-foot step-back jumper to give the Warriors their first lead since the opening minutes 61–59 with 10:09 left in the third quarter. Thompson and Payton led the defensive stands for the Warriors to rally, gain momentum, and retake the lead.

Many lead changes transpired in an intense battle that electrified the home Memphis fans.

Memphis would maintain their final advantage beginning with Jackson’s basket with 10:11 left in the game. The Warriors continued to keep the score close, getting within two points, 99–101, with 6:15 remaining with Poole’s technical foul free throw.

Thompson finished strong with a basket, two free throws, and an assist on Payton’s dunk that got the Warriors within three points, 111–108, with 1:14 left in the game.

Morant answered with consecutive baskets in the final minute to close out the victory. He made a 12-foot floating jump shot driving toward the basket with 53.7 seconds left, and a traditional three-point play with 28.9 remaining for a final score of 116–108. The Grizzlies have now won 20 of their last 24 games.

“I just like having that pressure,” Morant said. “I feel like that’s when I shine the most. I like to be the one taking that shot, hit or miss.”

Regarding running mate Bane’s comment that Morant is the best point guard in the NBA, “Gives me all the confidence in the world,” stated Morant. “I appreciate all my guys, appreciate the love from my guy Des. I just gotta continue to work, continue to prove myself each and every night. As long as I’m doing what I’m supposed to do, these guys have my back. Good things happen, what you see tonight, and we just got to keep it rolling.”

The Grizzlies host the Minnesota Timberwolves on Thursday in the second of four games at home.

While the Warriors travel to play Milwaukee on Thursday continuing a four-game road trip.