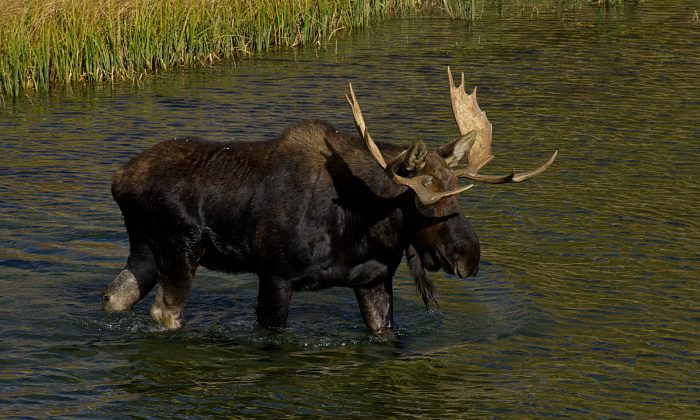 A moose saunters across the Snake River Oct. 4, 2012, in the Grand Teton National Park in Wyoming. (KAREN BLEIER/AFP/GettyImages)
US News

Moose on the Loose in Toronto Causes a Stir

A moose caused a stir after it was spotted dodging traffic and strolling through the local neighborhoods and airport runways in Toronto.

According to CBC Toronto, the moose was seen in the area southeast of the Buttonville Airport in Markham on Friday.

Extended helicopter coverage of the moose dashing through the streets can be seen at this link: ctv.news/mpFO2v.

At one point authorities closed a portion of Highway 404, officials told CTV,  as they believed the moose may have entered onto the busy highway.

Ontario Provincial Police (OPP) tried to track the moose through the day, ready to tranquilize and relocate it, but despite various sightings, and videos posted to the internet, it still eluded them.

Footage of the moose was recorded by local residents on Friday, Nov. 24.

@CP24 MOOSE ON THE LOOSE IN MARKHAM LOL pic.twitter.com/BdWo6uf3xk

As darkness fell, authorities abandoned the search, speculating that the animal had moved away from the area of its own accord, or was napping.

Using a tranquilizer gun in the dark was too dangerous, a spokesperson for the Ministry of Natural Resources and Forestry told The Star, adding that they would resume the search in the morning if there were any more sightings.

Sgt. Kerry Schmidt, spokesperson for the OPP’s Highway Safety Division told CBC Toronto on Friday that the moose seemed to be staying in one area. That area is near Highway 7 and Woodbine Avenue.

“That may be his natural habitat. We’re just keeping an eye on him to make sure he doesn’t continue out on the road and put the public at risk,” Schmidt told the network on Friday.

In an updated Tweet, Schmidt posted on Twitter that the moose was not near the highway area anymore. Adding that the departments are still assessing the situation.

Update: The #MooseOnTheLoose is no longer near the Highway, the #OPP have cleared. @YRP and @ONresources are monitoring its movements

According to CTV, both animal services and the Ministry of Natural Resources (MNR) were attempting to tranquilize the moose, so they could relocate him. But the moose kept moving before they could track his location down.

The OPP spokesperson is warning drivers to avoid the animal as it could cause serious injuries.

“This is a serious issue. We certainly don’t want the animal to get hurt.  We don’t want anyone in the public, any drivers, to get hurt,” he told CBC Toronto.

He said they don’t want to aggravate the moose in order to prevent less potential injuries.

“And we don’t want to stress out the animal either. Let’s just let him get back into his natural habitat,” Schmidt added.

There have not been any reports of injuries or crashes.

Staff members from MNR equipped with tranquilizer guns have been tracking him continuously since 10 a.m. Friday, Jolanta Kowalski from the MNR told CTV.

Kowalski said their goal is to funnel the animal into a green space without shooting it with a tranquilizer if possible. But if that plan fails, she said the staff will try to tranquilize the moose at a safe distance, away from the public.

“The goal is to assess how quickly you can do it, how safely you can do it, because safety is the main thing here. Not only for people who live in houses nearby, but there’s a road and an airport at play,” she told CTV.