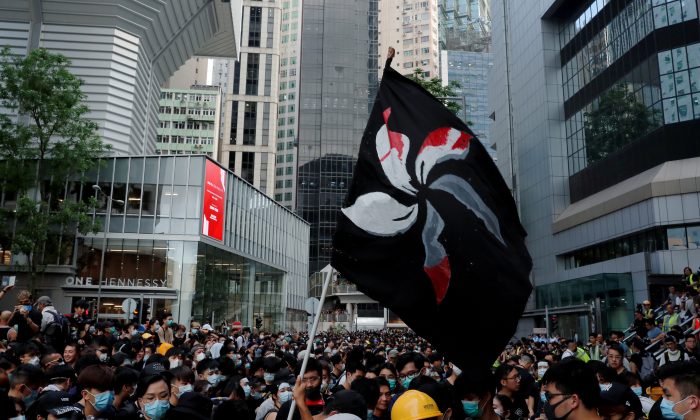 People hold up a black flag during a protest outside police headquarters to demand Hong Kong’s leaders step down and withdraw an extradition bill, in Hong Kong, China on June 21, 2019. (Tyrone Siu/Reuters)
Hong Kong

HONG KONG—Hong Kong’s protests have drawn millions of people to the city’s streets in recent months and thrown the former British colony into its biggest political crisis since it was returned to China in 1997.

The activism has also powered a wave of colorful cultural expressions of diverse origins, from protest mooncakes to Christian hymns, that have filled the city’s streets.

Here are some of them:

The five-word Christian hymn “Sing Hallelujah to the Lord,” originally penned in the United States in 1974, emerged as an unlikely anthem of the protests and was heard almost non-stop at the main demonstration site in front of the city’s Legislative Council.

As religious gatherings can be held without a permit in Hong Kong, the song provided a cover of legitimacy for protesters and was first used by a group of Christian students.

Its simple melody and words helped spread its use and it was seen at times as defusing tension with the police.

To coordinate amid the crowd chaos, protesters rapidly formed human chains that passed supplies as needed. A system of hand signals helped protesters communicate where supplies or aid were needed and to assist with constructing barriers.

(Click https://tmsnrt.rs/32pNi2Q to see a detailed interactive graphic about human chains and hand signals used during the Hong Kong protests over the extradition law.)

Umbrellas, particularly yellow ones, have become a symbol of Hong Kong’s democracy movement. Coming to prominence during the “Occupy” movement in 2014, protesters used umbrellas to protect themselves from pepper spray and tear gas fired by the police. An open umbrella also helps to keep the protester out of reach of police batons on the frontlines of violent clashes.

The Union Jack and Hong Kong’s colonial-era flag appeared prominently during protests, designed to rile authorities in Beijing. The Union Jack was unfurled when protesters stormed the legislature on July 1, the 22nd anniversary of the return of Hong Kong to China rule.

“I miss colonial times. The British colonial time was so good for us. I saw the future,” Alexandra Wong, 63, a protester known affectionately as ‘Grandma Wong’, who is usually seen waving a large British flag during the demonstrations, told Reuters.

An altered version of Hong Kong’s post-handover flag, with a black background instead of red, has been brandished by protesters, with the tips of the territory’s emblem flower, the bauhinia, on it dipped in red.

“You put it in a teapot, it becomes the teapot. Now, water can flow or it can crash. Be water, my friend,” Hong Kong’s martial arts legend Bruce Lee said during a 1971 interview in regards to his character on the TV series “Longstreet.”

References to that quote have appeared on signs and chants during the protests, as a call for activists to mobilize and disperse quickly.

That fluid and nimble approach marks a shift in strategy from the 2014 Occupy protests, when activists spent months encamped in the same places.

(Click to see an interactive graphic about the various signs seen during the Hong Kong protests.)

Mosaics of sticky notes containing messages of support for protesters have popped up across the territory from the Central financial district to Lantau island.

Part art, part politics, supporters have dubbed them “Lennon Walls” after the original John Lennon Wall in communist-controlled Prague in the 1980s, which was covered with graffiti, Beatles lyrics and messages of political protest.

Wah Yee Tang, a family-owned bakery in Sai Ying Pun district, started printing messages of support for the protesters such as “Hong Kong People” and “Let’s Fight Together” on mooncakes.

Some mooncakes are inscribed with the text “Report Your Mother,” a humorous take on an obscene insult hurled at journalists by police at a recent protest.