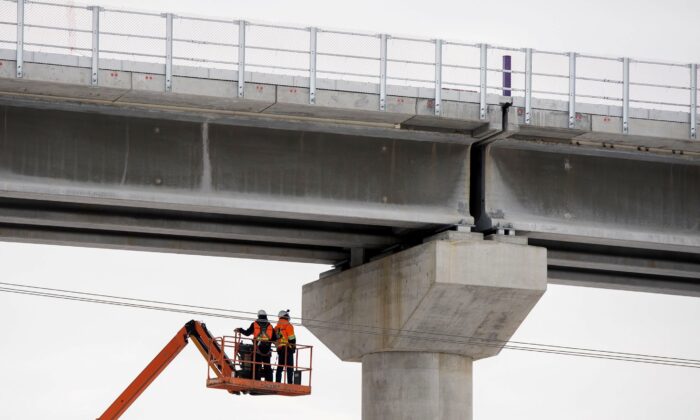 Workers are shown beneath a section of the Réseau express métropolitain, a new automated light rail network under construction in Montreal, on Feb. 2, 2022. (The Canadian Press/Graham Hughes)
Viewpoints

With all the terrible things happening in the world right now, it might seem beside the point to discuss urban light rail. But public policy, like golf, is never so bad it can’t get worse. And a tiny throwaway line in a story out of Montreal, a cloud no bigger than a man’s hand, portends a terrible deluge if we do not act fast.

Again, you might say Montreal is one of those fortunate cities that doesn’t know what real trouble is, so people there fixate on trivia like expensive French tutoring bouncing off the president of Air Canada. Or the light rail Réseau express métropolitain that was, yet again, oversold.

In the March 26 National Post André Pratte discusses that problem, right down to glistening images of clean, sleek, 23rd-century infrastructure giving way to big ugly support pillars and “catenary” to bring it power. To which one might well reply “Fool me twice, shame on me” because they always do it. (Or “What’s a catenary?” to which Wikipedia replies “the curve that an idealized hanging chain or cable assumes under its own weight when supported only at its ends in a uniform gravitational field.”)

I remember an Ottawa project hyped with images of dawn reflecting off the front façade even as a glorious sunset glowed behind it, which my editors at a different paper inexplicably refused to illustrate with my stock “sunburst” applied to a shot of my mom’s grubby bird feeder. It’s old news. As is light rail, like virtually every megaproject being routinely slicked up by politicians, bureaucrats, and engineering firms who know by the time voters and taxpayers wise up it’s too late to cancel so the money keeps flowing, including to those overseeing the resulting crisis.

So why am I droning on? Because of that throwaway line. Whose setup is that, in a typical PPP (public-private partnership) especially appealing to the Canadian chattering classes because it combines the efficiency and accountability of government with the transparency of private enterprise, this boondoggle is the property of the (in)famous Caisse de dépôt et placement du Québec, which Wikipedia calls “an institutional investor that manages several public and parapublic pension plans and insurance programs in Quebec.”

By institutional investor they mean a QUANGO or “quasi-autonomous non-governmental organization” that, again, combines the least attractive qualities of the public and private sector in one smug, lucrative, scary bundle. This particular one has $420 billion under management, and it better succeed or your pension gets it. Or “s’en prend une” since it’s a jewel in the “maîtres chez nous” Quiet Revolutionary crown. If you’re an Anglo seeking similar trouble, call the Canada Pension Plan Investment Board.

Yes, trouble. Because here, finally, is that throwaway line. The project is of course behind schedule, over budget, and unlikely to attract riders out of private vehicles in anything like the promised numbers. As Pratte observes, “one has to wonder what the Caisse is doing building railways in the first place.” Which he then answers by recalling “an informal meeting held a few weeks after the initial announcement,” where then-Caisse CEO Michael Sabia “explained that given the low returns provided by bonds, the Caisse was looking for more profitable vehicles to invest in.”

Yikes. Because translated, it means to deliver the generous pensions the large number of Quebecers who work for the state were promised in return for comically inadequate premiums, to get the rate of return the free-money-from-the-government fantasy requires, they must now take high-risk gambles. Prudent investing won’t get it done. (Nor will the kind of pyramid scheme where government investors buy government bonds.)

As I say, it’s not just the Caisse or Quebec. Andrew Coyne used to make quite a hobby of tracking the extraordinary expansion in staff and salaries at the CPP Investment Board as it moved from boring hedge fund to Vegas high roller. And the obvious “d’oh” problem with such gambles is that they often fail expensively. Worse, when you have the credit of the state behind you, directly or because the prestige of an entire model of governance and mode of existence hangs on prolonging your success or mirage of same, you can double down again and again until the losses are so huge not even Leviathan can cover them.

People like to worry about debts and deficits. At least some do, including me. Others cheer at every vast new handout like cheap daycare from the government’s magic money tree. But as no such plant exists, it’s the unfunded liabilities that are really ominous, as organizations meant to be squeezing manna from government sky pie find themselves wandering in an actuarial desert, throw your pension on black clouds, and down pours red ink.

Hence this train portends an ever-worsening ride through a deluge that washes away track, stock, and passengers.