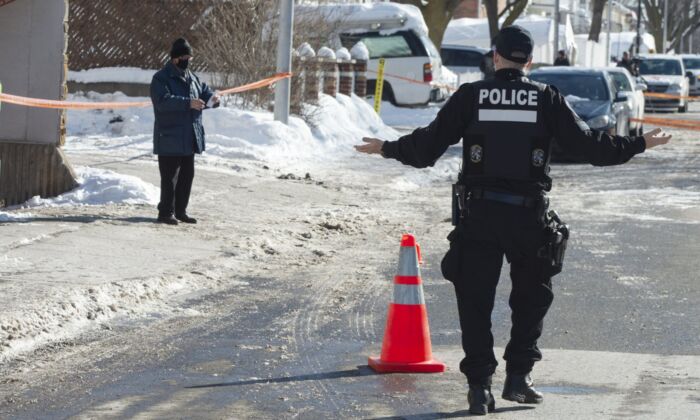 A police officer asks a man who wandered into a crime scene, where A 15-year-old girl was killed to leave, in Montreal, February 8, 2021. (The Canadian Press/Ryan Remiorz)
Canada

Montreal police say they’ve made an arrest in the case of a 15-year-old girl killed in a drive-by shooting last year.

Police told a news conference today that a 26-year-old man is expected to face a first-degree murder charge in the death of Meriem Boundaoui, who was fatally shot in the city’s St-Leonard neighbourhood in February 2021.

Police say the girl was with another person inside a stopped car when a second car drove up and someone opened fire.

The girl and a 21-year-old man who was on the sidewalk were hit by bullets, and she was later declared dead.

Boundaoui was the first of several young people to die violently in the past year and a half in Montreal, prompting widespread concern and calls from authorities to do more to reduce gun violence in the city.

Police say the suspect was already in detention on other charges when he was arrested, and they add that their investigation is ongoing.