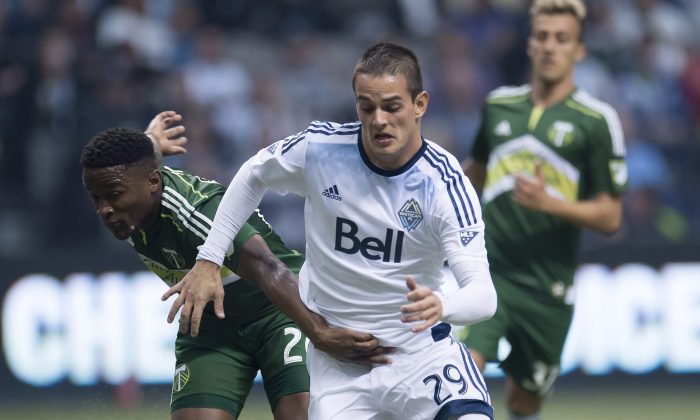 Vancouver's Octavio Rivero fights for control of the ball with Portland’s George Fochive in Vancouver on March 28, 2015. Rivero was held off the scoresheet for the first time in four games against Portland. (The Canadian Press/Jonathan Hayward)
Canadian Content

Toronto FC, again this year, made the biggest splash in the offseason, but are being met by a familiar tale of unkind results, while fellow Canadian MLS sides, Montreal and Vancouver, have both had terrific months of March.

The Impact may not have had a more eventful month in their professional history—and it’s not for what they did in MLS competition. Montreal made history on March 3 with a 1–1 draw at home to Pachuca in dramatic style to reach the CONCACAF Champions League semifinal.

Meanwhile, the Whitecaps are off to their best start ever—three wins in four games, but actually feel much improvement is needed.

Giovinco Is TFC’s Latest Big Gamble
For TFC, new designated players Seba Giovinco and Jozy Altidore shone in their opening game, but two subsequent losses have to make the Reds begin to wonder if the team’s going down the same cursed road as last season.

The Impact look to be in good shape to reach the CONCACAF Champions League final with a 2–0 home win over Alajuelense in the first leg. They can be pardoned if the MLS regular season is second priority for the time being. The season is long and it is not won or lost in March and April. The Impact have one loss and two draws, but gave up a two-goal lead to Orlando in their home opener and settled for a draw.

The Impact, far more quietly than TFC, have built a team that looks like it can compete for a playoff spot. The strength of the team is on defense now, which is quite the opposite to how it was last year.

In fact, the Impact are in desperate need for a striker while new addition Laurent Ciman has become the general in central defense. The Impact have only conceded two goals from open play in five games (CCL and MLS) with Ciman in the lineup. Last year, the Impact let in the third most goals in MLS and finished dead last in the league.

Ciman didn’t play Saturday against Orlando and the Impact defense surrendered two goals from open play. It should be noted that first-choice goalkeeper Evan Bush missed his first game of the year as well.

The lows for the Impact in an eventful month have been the serious injuries to winger Justin Mapp (elbow) and Cameron Porter (knee – out for season).

Regardless of the loss of Porter, the Impact needed to strengthen up top.

“We’re still looking [for a striker], but we need to make sure we do it properly,” Saputo said.

The Impact had a running start from Champions League play and have already dealt with two difficult road games in New England and D.C. United. Aside from injuries, March has been a banner month for the IMFC.

Vancouver has had a remarkable March, winning three of four games while, arguably, not deserving to win any of them. Granted, soccer can be a cruel sport, and the Whitecaps have been cruel to Chicago, Orlando, and Portland. Their three wins, all by one goal have come in the 86th, 96th, and 91st minutes.

We need to improve a lot.
— Carl Robinson, Vancouver Whitecaps

The Whitecaps have already won two games on the road; they won a total of three on the road last season.

Central to their success is new designated player striker Octavio Rivero who scored the team’s first three goals—the last two being late game-winners. Also, Danish goalkeeper David Ousted has been outstanding, most notably in the 2–1 win over Portland on Saturday.

Vancouver’s only played one truly poor half of soccer—the second half against Toronto FC in their home opener.

But the question has to be, given their success, how good are the Whitecaps? Of course, it’s hard to say after only four games. One only needs to remember the Impact’s 2013 season in which they won their first four games, ended up barely making the playoffs and getting destroyed in their only MLS playoff game.

The Whitecaps, no doubt, have the quality in goal and on defense, and the addition of Robert Earnshaw will help with the odd goal, but it’s hard to deny the element of good fortune Vancouver has had in March and how those kinds of runs can even out over the course of a season.

It’s great for the Whitecaps that their record is 3–1–0 when it could very easily be 0–2–2 (wins–losses–draws). Head coach Carl Robinson said his team was “average at best” against Portland and that his team “probably deservedly maybe should’ve lost the game.”

It’s hard to see Vancouver consistently turning draws into wins with late goals, but a handful of those could be the difference between making the playoffs and not.

“We need to improve a lot,” said Robinson ahead of a busier schedule in April.

It wasn’t going to be easy for Toronto FC to start the season with seven games on the road. But after their win in Vancouver, the same old problems started to creep in— injuries, international call-ups, poor defending—and questionable officiating.

A dubious red card to Justin Morrow did not help an indifferent performance against a good Columbus team and a visit to Salt Lake was always going to be a mountain to climb (now one win in eight trips).

Toronto FC’s season is following that familiar pattern of a good start and then things start going south. Against Real Salt Lake on Sunday, the Reds were without DPs Jozy Altidore and Michael Bradley (U.S. national team call-ups) and three starters on defense (due to injury).

Poor marking led to RSL taking a 1–0 lead before backup defender Nick Hagglund’s goal was ruled no good due to a mysterious foul he committed in the lead-up to the goal.

“A mental lapse when you have that euphoria,” reported Toronto FC’s Twitter feed of Greg Vanney postmatch.

Past TFC seasons have been plagued with conceding late goals, no consistent personnel on the backline, and, it has to be said, some difficult officiating decisions.

The Reds appear to have more depth in the squad than ever before and that depth was put to the test against RSL. It fared reasonably well, except for a couple of plays which proved costly.

Bradley and Altidore haven’t missed their last games for TFC due to U.S. national team duty, but Giovinco had his best game for the Reds and nearly carried them to a draw against RSL.

That squad depth is likely the decisive factor for TFC to depart from prior seasons’ woes and make the playoffs for the first time.

It’s been an eventful March for TFC, the Impact, and the Whitecaps, but most of what happened in the month will be forgotten in the push to the MLS playoffs. But for the moment, both the Impact and Whitecaps have much to be happy about while TFC licks its wounds.