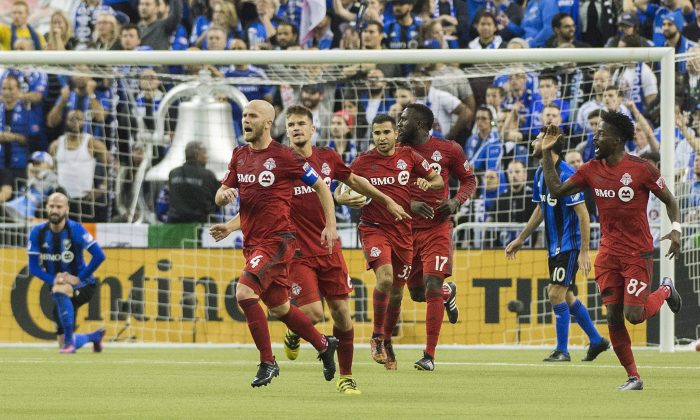 Toronto FC's Michael Bradley celebrates after scoring his side’s second goal against the Montreal Impact in the first leg of the MLS Eastern Conference final in front of 61,004 fans at the Olympic Stadium in Montreal on Nov. 22, 2016. (The Canadian Press/Graham Hughes)
Canada

MONTREAL—A sold out Olympic Stadium crowd of 61,004 witnessed arguably the most important soccer match in Canadian history as the Montreal Impact hung on for a riveting 3–2 win over Toronto FC on Tues., Nov. 22.

It was a match that had all the elements of a classic: two archrival clubs in unprecedented territory, battling to be the first Canadian team to reach MLS Cup; goals, tactical changes, momentum swings, the league’s best players—and a chance to watch paint dry.

Yes, the match was delayed nearly 40 minutes as the lines of the 18-yard boxes were initially painted too narrowly.

While the delay seemed to affect TFC more, the energy of the crowd gave Montreal a boost and the home side took a 2–0 lead after just 12 minutes. TFC was in dire straights when Ambroise Oyongo made it 3–0 early in the second half.

But a tactical change that subbed on two Canadians—Will Johnson and Tosaint Ricketts—brought out Toronto’s fighting spirit and the Reds clawed back two valuable away goals.

“It was edge of your seat stuff,” TFC head coach Greg Vanney said. “For me, a little bit too roller coaster.”

It was a match that showed how entertaining soccer could be. Montreal was in complete control leading 3–0. But one of the best things about the sport is seeing a team change its tactics, show some fight, and get a positive result.

“There were some tactical things in there for some of the more astute fans,” Vanney said. “You had two different teams trying to get an edge on each other, which I thought was interesting.”

Impact head coach Mauro Biello said it was an amazing game. “It’s great for a young soccer player to experience that. It’s exceptional for soccer in this country.

“A lot of people will talk about this game and soccer has a big future in this country.”

It was edge of your seat stuff.
— Greg Vanney, Toronto FC

In terms of Canadian club soccer, there is no question that the MLS Eastern Conference final showdown between Montreal and Toronto—known as the “401 Derby” for the major highway between the two cities—is the most important ever.

“It was incredible. In all ways, it was a great night to be part of from our standpoint,” TFC captain Michael Bradley, who scored his team’s second goal, said.

Montreal’s Canadian captain Patrice Bernier said it was nice to win a game in front of a crowd exceeding 60,000. The Impact lost to Club América in April 2015, also in front of 61,004, in the CONCACAF Champions League final.

“For Canada, this was perfect,” Bernier said about the game being an advertisement for the sport in the country. “The crowd was fantastic. It was a great feeling and we won.”

The match is a big deal for Canada nation-wide. Even Canadian Prime Minister Justin Trudeau tweeted: “A milestone for Canadian club soccer tonight – good luck to @impactmontreal & @torontofc in the MLS Eastern final.”

Dick Howard harkens back to the Canadian men qualifying for the World Cup with a memorable win in St. John’s in 1985 as a high point for the men’s national team. Howard, a FIFA technical adviser who represented Canada’s men’s national team in the 1970s, says the Nov. 22 Impact–TFC match shows how much the game has progressed in 30 years.

Howard, who appears on “Soccer Is A Kick in the Grass,” the longest running radio show for soccer in North America, said what also helps to stoke the Impact–TFC rivalry is the rivalry in other sports—notably hockey between the Canadiens and Maple Leafs. Montreal beat Toronto in NHL action 2–1 just three days earlier at the Bell Centre.

“Because of other sports, it’s a rivalry that’s just developed over the years. There’s always been that little bit more intensity when Toronto play Montreal,” Howard said.

For Canada, this was perfect.
— Patrice Bernier, Montreal Impact

And it would go a long way toward increasing soccer’s growing popularity in Canada if either Montreal or Toronto went on to win MLS Cup.

“I look at the Toronto Blue Jays when they won the World Series, it was tremendous for Canadian sports,” Howard said. “I don’t think our neighbours to the South liked it too much!”

He feels both teams have the potential to pull off the feat. Then, Canada has to capture the spillover effect and keep the momentum going by getting more Canadian players playing for the Impact and TFC.

Montreal and Toronto put on a show at the Big O and have set up another potential classic at BMO Field in Toronto on Nov. 30. These are heady days for soccer in Canada.