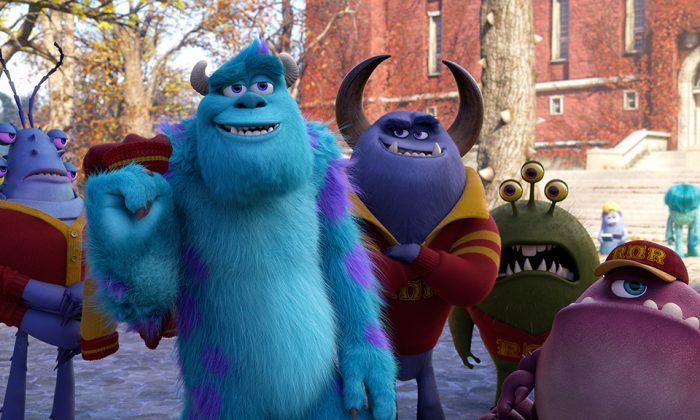 James P. Sullivan (second from left, voiced by John Goodman) must team up with others to achieve his potential in the animated comedy-adventure “Monster University.” (Courtesy of Pixar)
Entertainment

A tale of cooperation
By Mark Jackson

You can just hear the pitch: “Monsters University! It’s Hogwarts for Monsters!” Excellent concept. Execution? Not bad. Fabulous for kids of course, but the original “Monsters, Inc.” was an instant classic for all ages, as were most of Pixar’s early works. Mediocrity setteth in.

Before they worked for “Monsters, Inc.,” diminutive lime-green M&M-like Cyclops Mike Wazowski (Billy Crystal) and large, blue and purple fuzzy monster James “Sully” Sullivan (John Goodman) went to college. It turns out that they were classic, hate-each-other roommates. They’re both “scare majors,” but big Sully’s a talented, no-work-ethic scare-scion, and little Mike’s a book-learning overachiever with no scare-ability.

Let’s backtrack to the original movie so we can gain an understanding of why a monster would go to scare-school. You see, monsters live in a different dimension from humans. What powers their light bulbs, washing machines, and toasters is “scream energy.”

Scream energy is obtained by creating portals to wee human children’s bedrooms, sneaking in when the kiddies are snoring, waking them up, and scaring them silly. This produces screaming (and probably bed-wetting), the resultant energy of which is then captured and contained. Good thing they haven’t figured out how to breach our portals for real, or else human kids would all have post-traumatic stress disorder.

Meanwhile, back at Monsters U, Mike and Sully can’t make the grade. They get on the dean’s bad side (Helen Mirren as a sort of praying mantis-centipede) and get booted from pre-scare.

What to do, what to do? There’s the school’s favorite tradition, a team-scare frat-house showdown. If they win it, they get back in the program. Each one has what the other one doesn’t. Cooperation is the name of the game for Mike and Sully!

But first they need to join a frat. The Oozma Kappas are the only motley crew of a frat who’ll have them. They train, they fail, they go on a field trip to Monsters, Inc., and they get inspired by the big leaguers. The “Rocky”-like training montage ramps up. They’re ready!

The 3-D works well. There are some good sight gags, such as a small snail-monster, late to class, huffing and puffing and getting a quarter-inch farther down the sidewalk. The college yuks will not be understood by little ones, which is already too much for kids and too meager for parents.

The success of the “Toy Story” sequels is probably why “Monsters, Inc.” now also has a sequel. However, the ‘Toy Story’ sequel and threequel expanded on that particular little world, whereas “Monsters U” feels like a rehashing.

“Monsters University” brings to mind another movie about a guy with a big heart but no talent—“Rudy.”

Rudy was too tiny for Notre Dame football, and Mike’s just not scary. However, he’s brilliant at everything else about scaring. Sully only does the scary. He can’t do anything else well. Thus Mike’s able to set the scene so that when Sully delivers the scary, it’s heart-attack level.

Will this leave 4-year-olds with more fear of what might be lurking under the bed or in the closet? Nah. Hopefully this should all function as monster-under-the-bed deconstruction. And cooperation with others just might be the most important thing children and adults need to learn.