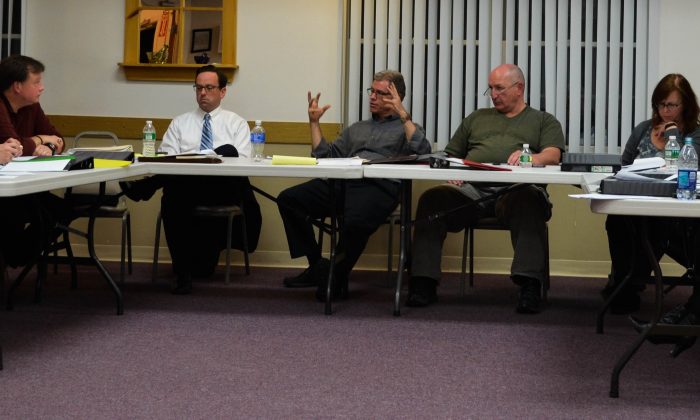 The Town of Monroe’s revived Board of Ethics at the Monroe senior center on March 10. (Yvonne Marcotte/Epoch Times)
New York

MONROE—The town of Monroe’s revived board of ethics met on March 10 with a full agenda. All members were present. On this its second meeting, the board considered procedures and processes.

First order of the day was electing a chairman and alternate chairman. Michael Egan was elected and chaired the rest of the meeting. The board elected Lance Whitman as alternate chairman in case the chairman should be absent. Ann Marie Morris agreed to take on secretarial duties until further notice.

Discussion was had on how to keep confidential documents. The board decided to keep documents in a locked file cabinet at the town hall. The board was told to complete disclosure statements.

There was an extensive discussion on how to handle reports of town code violations. The board does not intend to police the town. Code violation forms will be kept sealed with the town clerk who will send them to the board’s counsel who will then email the form to board members.

Board member Paul Phelan accepted the task of recommending revisions to the town’s Code of Ethics. Phelan extensively made use of the work of Mark Davies, whom Whitman called the “godfather of ethics.” Davies has written extensively about ethics in the course of governance, especially local government, and is now chairman of New York City’s Conflict of Interest Board.

The board decided to revisit the town’s code of ethics in light of serious issues facing the town. Davies contends that change happens around ethics during a time of crisis such as the town now faces.

In a New York Times interview titled “Ethics as a Working Part of Official Life,” Davies said little has changed in the past 20 years in the state. “From time to time a municipality will feel the need to make changes and may or may not do it,” he said in The Times Q&A. Davies said disclosure forms were important for good municipal governance, which is what the ethics board members handled forthright.

An annexation resolution approved in 2015 has become a divisive issue for the town. Davies said towns revisit ethics if there is a scandal. “The only time you have change is when someone in power is pushing it or you have a major scandal and you have to respond to the scandals.”

The other time is during a change in administration. “Change can happen if you have a new administration taking over and part of their campaign was that they were going to increase the ethics law,” Davies stated.

With the election of two new councilors and an acting supervisor, the town board invited residents to bring back to life the town’s board of ethics.