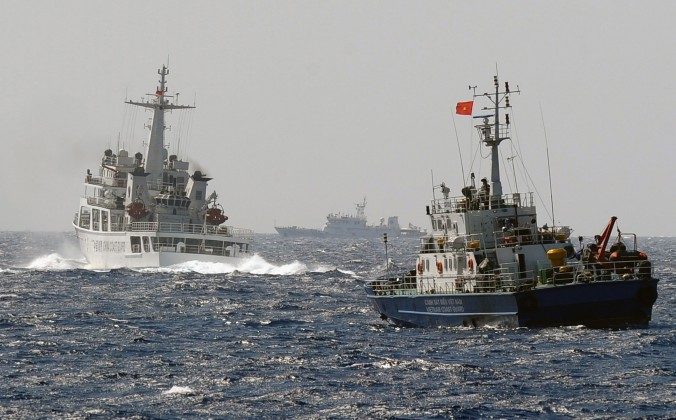 A China Coast Guard ship (L) blocks the way of a Vietnam Coast Guard ship on May 14, near to the site of a Chinese drilling oil rig (R, background) being installed at the disputed water in the South China Sea off Vietnam's central coast. (Hoang Dinh Nam/AFP/Getty Images)
Epoch China Blog

The Chinese regime has been gaining traction in its takeover of the South China Sea, but you wouldn’t know this by reading the papers. The reason ties into an unfortunate trait in journalism. Basically, China is doing so much in the South China Sea that it’s no longer news.

The problem is that while China is constantly active in its aggressive claims to the region, its actions are largely the same day-by-day. For journalists, the monotony of China’s actions means that today’s story wouldn’t be much different from yesterday’s. The Chinese regime is still pressing its claims and still launching incursions into the South China Sea. China’s neighbors are still challenging China’s claims.

China seems to recognize the strategic advantage of monotony. In particular, it appears keenly aware that the press will quiet down as long as you don’t change or address what you’re being criticized for.

The problem is similar to China’s cyberattacks against Google, which Google revealed in January 2010. There was a flurry of news coverage when Google first announced China’s attacks, which security experts dubbed “Operation Aurora,” but news of the attacks quickly died down. Yet, while the press stopped covering the cyberattacks on Google, China’s hackers did not stop their attacks on Google.

The problem for the press is you can only report “China still attacking Google” so many times before readers stop reading.

Journalists often face pressure from two sides. One of the traditional roles of the press was to act as a watchdog—to sound the alarm on issues and alert the public and lawmakers. At the same time, we’re in an industry built around readers, and if we can’t find something new or interesting to say, it becomes difficult to keep attention on a topic.

And there’s also the fallout from this problem, that when pressure from the press and the subsequent wave of pressure spurred by public knowledge isn’t knocking at the doors of lawmakers, then situations tend to slide backwards—and in the South China Sea we’re now seeing international pressure on the Chinese regime starting to weaken.

Just this week, for example, the U.S. State Department began playing down a report it issued in early December that challenged China’s claims to the South China Sea. Public officials aren’t pressuring China to repeal its claims with the same zeal as they were when the press was actively behind them, and now they’re even beginning to slide backwards.

The unfortunate nature of news, as it relates to events taking place in the world, is that sometimes coverage will drop on certain issues if nothing unique happens, even if the issue presents a serious threat to the free world—like China’s claims in the South China Sea.

In the case of the South China Sea, where the Chinese regime is now gaining traction in its aggressive territorial claims, the impact from lack of reporting on monotonous yet important topics can be clearly seen.