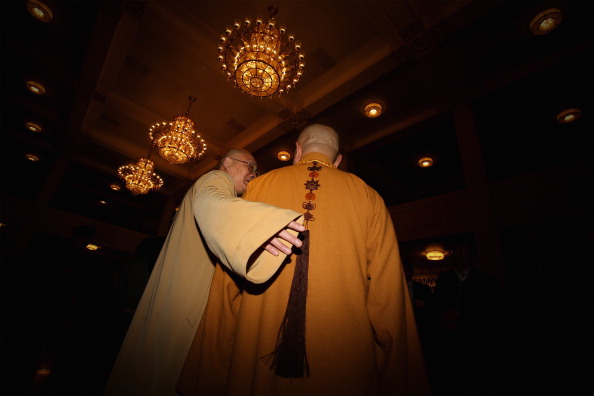 Two Buddhist monk delegates arrive the sixth plenary meeting of the National People's Congress at the Great Hall of the People in Beijing, on March 16, 2013 (Feng Li/Getty Images)
Chinese Regime

BEIJING—One of China’s highest-ranking Buddhist monks quit as the president of the Beijing-sanctioned Buddhist Association of China on Aug. 15 after a government investigation was recently launched into accusations of sexual misconduct.

Xue Cheng, 51, is an abbot of Beijing’s Longquan Monastery and heads the Buddhist Association, through which the Chinese regime monitors the activities of Buddhist practitioners in the communist country. He is also a member of the Standing Committee of the Chinese People’s Political Consultative Conference, a political advisory body of the Chinese Communist Party (CCP).

The Buddhist Association of China said in a statement on its website that it had accepted Xue Cheng’s offer to resign from the chairmanship and other posts on Aug. 15, without elaborating on the reasons.

China’s religious affairs administration launched an investigation following accusations leveled against the abbot in a 95-page document prepared by Xian Jia and Xian Qi, former supervisors at the Longquan Monastery.

In the document, they claimed that Xue sexually assaulted his female disciples and psychologically manipulated them, causing some to become mentally unstable as a result. They included text conversations between Xue and his female disciplines on WeChat, a popular Chinese social media platform, as evidence of his allegedly inappropriate behavior.

On Aug. 1, Xue posted a statement on his Sina Weibo account, China’s equivalent to Twitter, denying the allegations.

Xue’s wrongdoing went beyond alleged sexual misconduct. He was allegedly involved in a corruption scheme when 12 million yuan ($1.76 million) raised by a chief monk in July 2015 went missing, according to the 95-page document. Then, in March 2018, Puji Temple, an affiliated branch of the Longquan Monastery, transferred 10 million yuan ($1.64 million) to Xue’s personal accounts.

Xue was also involved in human rights violations when he started writing articles to attack the spiritual group Falun Gong, upon being appointed to director of the “China Anti-Cult Association” established by former CCP leader Jiang Zemin.

Falun Gong is a meditation practice that was hugely popular in China in the 1990s, before Jiang ordered a nationwide persecution of its adherents in July 1999. Jiang mobilized the state’s propaganda apparatus to spread defamatory claims that the spiritual group was a cult.

Xue is one of the most prominent officials to meet his downfall since the #MeToo movement began to gain momentum in China.